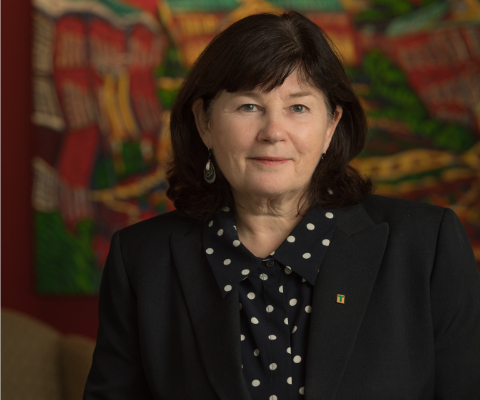 Professor Dawn Russell is the president and vice-chancellor of St. Thomas University, in Fredericton, New Brunswick since July 2011.

She serves on the Board and chairs the Governance Committee of the Board of Tidnish Holdings Ltd., the Bragg group of companies. She is a member of the Board of the Centre for Law and Democracy and of FAIR Canada.

She was co-counsel with Yves Fortier for the Province of Nova Scotia in the Nova Scotia and Newfoundland and Labrador Maritime Boundary Arbitration (2001-2002); and served on a Ministerial Advisory Panel on the Sustainable Management of Straddling Fish Stocks, appointed in December 2004 to advise the Canadian Minister of Fisheries and Oceans. From 2005-2007 she was a member of the Crawford Panel on a Single Securities Regulator, and in February 2008 was appointed by the Federal Minister of Finance to a seven member Expert Panel to Review Securities Regulation in Canada.