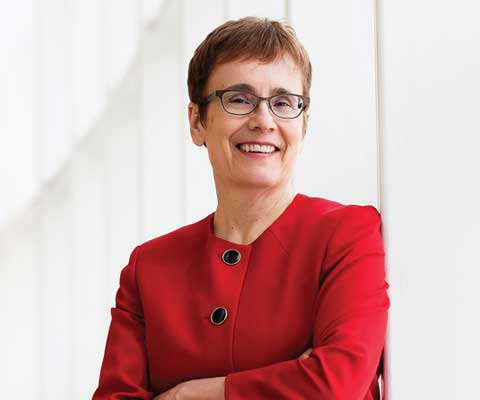 Dr. Annette Trimbee assumed the role of president and vice-chancellor at MacEwan University on August 1, 2020.

Dr. Trimbee is a director on the board of Universities Canada.

Influenced by her Métis grandmother, Dr. Trimbee grew up in a family of eight in Transcona, Manitoba. One of her proudest achievements is the development and approval of the Indigenous course requirement for all undergraduate students attending the University of Winnipeg, among the first in Canada.

Previously, Dr. Trimbee served as president and vice-chancellor at the University of Winnipeg. In May 2016, Dr. Trimbee was appointed to the board of Manitoba Hydro where she will share her knowledge and expertise in water management and energy policy.

In 2015, she served on a panel, whose task was to review and make recommendations related to Alberta’s oil and gas royalty regime. In 2015, she was also named co-chair of the Lake Friendly Stewards Alliance by the Manitoba government. The goal of the Alliance is to create a broad base of support for and awareness of the challenges facing Manitoba’s lakes, especially Lake Winnipeg.

Previous to this role, she was a deputy minister of several departments in the Alberta government, including Finance and Treasury Board, Service Alberta and Advanced Education and Technology.  Key accomplishments include Alberta Budget 2012 and 2013, the redesign of Alberta’s innovation system and creation of the Alberta Innovates Corporations, bringing Alberta postsecondary institutions together to plan and collaborate through Campus Alberta, and development of Alberta’s Health Policy Framework and Integrated Resource Management Policy Framework.