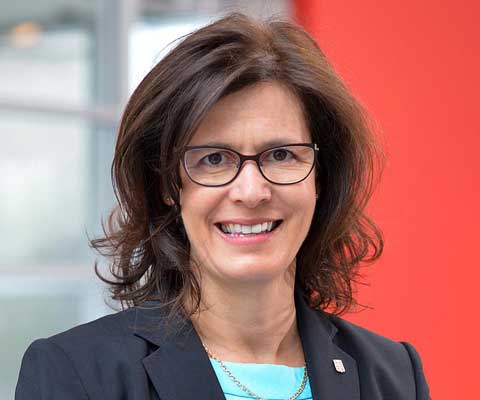 Sophie D’Amours has been rector of Université Laval since June 1, 2017.

She currently holds the role of past chair on Universities Canada’s Board of Directors.

Dr. D’Amours has been a professor in the mechanical engineering department of Université Laval since 1995. She has extensive experience in higher education, research and university management, both in Quebec and on the international scene. She holds a bachelor’s degree in mechanical engineering, a master’s degree in business administration and a PhD in engineering mathematics. She has been the Canada Research Chair in Planning Sustainable Forest Value Networks since 2009. Her research focus is business engineering, value chain management and decision-making processes.

She was Université Laval’s vice-rector of research and innovation from 2012 to 2015. Dr. D’Amours has served as board chair of the Centre de recherche industrielle du Québec (Quebec centre for industrial research) since 2010. She also sits on the boards of the Société québécoise des infrastructures (Quebec infrastructure corporation), the Natural Sciences and Engineering Research Council of Canada and the International Development Research Centre, among others. She was appointed to the strategic steering committee of France’s Institut agronomique, vétérinaire et forestier (agronomy, veterinary science and forestry institute) in 2016. She also co-chaired the advisory committee created by the provincial government to help prepare the Québec Research and Innovation Strategy.

Dr. D’Amours has been a guest lecturer in a number of countries, including Norway, Sweden, France, Chili, Argentina and the United States. With over 130 scientific publications to her credit and many contributions to events in Canada and abroad, she is viewed as an accomplished researcher and widely recognized for her work on forestry planning models.

She is a member of the Canadian Academy of Engineering and was recently named an international fellow of the Royal Swedish Academy of Agriculture and Forestry. Together with her colleagues, she was awarded the prestigious Brockhouse Canada Prize for Interdisciplinary Research in Science and Engineering. She also received the Henri-Gustave-Joly-de-Lotbinière award from the Ordre des ingénieurs forestiers du Québec (Quebec order of forestry engineers) for her contribution to the province’s forestry sector.