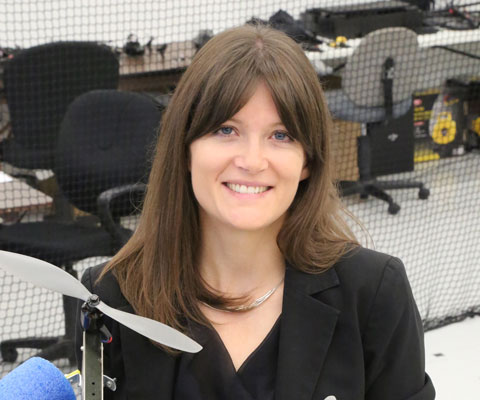 Angela Schoellig, an assistant professor at the University of Toronto’s Institute for Aerospace Studies (UTIAS), was awarded a Sloan Fellowship for her early scholarship in the interface between robotics, controls and machine learning. Dr. Schoellig, who heads the Dynamic Systems Lab at UTIAS, is also an associate director at the Centre for Aerial Robotics Research and Education at the university.

With her team, Dr. Schoellig aims to enhance the performance of robots, enabling them to learn autonomously from experience so they can become safer and more efficient tools for humans. The applications for her research range from flying drones that can perform dangerous search operations during a disaster to self-driving cars that can adapt to changing weather conditions.

Dr. Schoellig holds an MSc in engineering science and mechanics from the Georgia Institute of Technology, as well as a masters degree in engineering cybernetics from the University of Stuttgart, Germany. Her PhD from ETH Zurich was awarded the ETH Medal, and she was one of 35 recipients of the 2013 Dimitris N. Chorafas Foundation Award. Since then, she has received much recognition for her early scholarship, including as the youngest member of the 2014 Science Leadership Program, which promotes outstanding scientists in Canada.

Academic collaborators include ETH Zurich, the Senseable City Lab at the Massachusetts Institute of Technology, and the Institute of Networked and Embedded Systems in Austria. The Government of Canada has supported Dr. Schoellig’s work through the Natural Sciences and Engineering Research Council of Canada, the Canada Foundation for Innovation, and Defence Research and Development Canada.