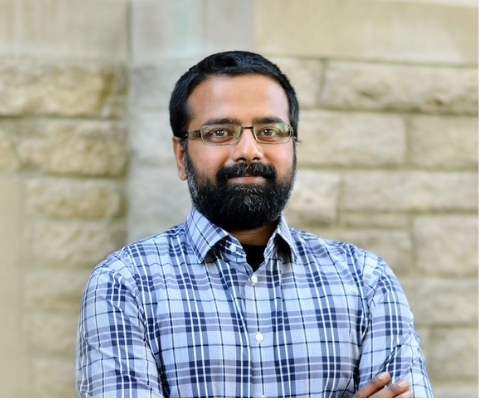 Understanding the inner workings of the brain

Arjun Krishnaswamy, an assistant professor in the department of physiology at McGill University’s faculty of medicine, was awarded a Sloan Fellowship. The award, which recognizes promising early-career researchers, will help his lab pursue studies in neural circuitry.

Dr. Krishnaswamy seeks to understand how neurons form the complex circuits that underlie our mental abilities. He studies this problem in the retina, a thin sheet of neural tissue at the back of the eye that contains several neural circuits arranged in parallel, each attuned to detect a unique visual feature such as motion. Greater understanding of how these circuits assemble and how their wiring patterns support feature computations could yield insights into the workings of the brain, including how to treat neurological disease when circuits malfunction.

A member of the Cell Information Systems group at McGill’s Life Sciences Complex, Dr. Krishnaswamy joined the university’s faculty in 2017 following postdoctoral research at the Center for Brain Science at Harvard University. He earned his PhD from McGill University in 2009 after completing a graduate degree in Physiology in the faculty of medicine. He received a bachelor of science from McGill in 2003.