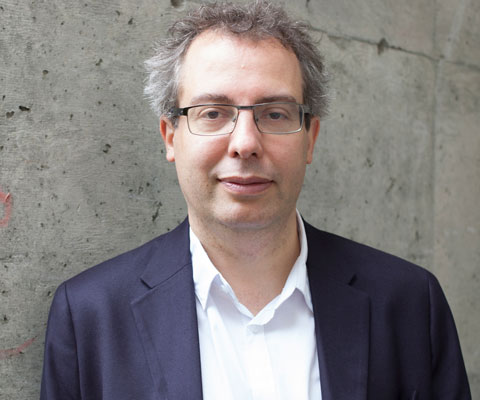 Dániel Péter Biró, who was awarded a Guggenheim Fellowship in Music Composition, likens the process of creating music to bungee jumping — a frightening plunge into the unknown.

A researcher as well as a composer, the various strands of Dr. Biró’s work often intertwine. His PhD dissertation at Princeton University in 2004 examined historical relationships between orality, memory and notational development in Hungarian laments, Jewish Torah recitation and early Christian plainchant. Such studies into ancient traditions can find expression, directly or indirectly, in his own compositions.

His initial studies took him to Hungary, Germany, Switzerland, Austria, and Israel. In 2011, he was a visiting professor at Utrecht University where he researched Jewish and Islamic chant as practised in the Netherlands. More recently, he was a fellow at the Radcliffe Institute for Advanced Study at Harvard University where he completed Mishpatim (Laws), a cycle for voices, ensemble and electronics.

Dr. Biró’s work has been performed by ensembles around the world, including the Frankfurt Radio Symphony, the Ensemble SurPlus, the JACK String Quartet, Kai Wessel and the Schola Heidelberg, among others. In 2013, his composition Kivrot Hata’avah (Graves of Craving) represented Canada at World Music Days in Vienna, Austria. International awards for his work include the Gigahertz Production Prize and Vocal Music Competition of the ISCM–Austria. In 2014, Oxford University Press published a study on the string quartets of Belá Bartók co-edited with Harald Krebs, a colleague at the University of Victoria.

Dr. Biró’s work has been supported by multiple grants from the Canada Council for the Arts. In 2012, the Council supported a new commission, which was premiered by violist Ralf Ehlers (Arditti Quartet) at the International Symposium of New Music and Computer Music in Curitiba, Brazil. In 2009 he received Council funding to help compose Udvarim Achadim (And the Same Words), a piece featured on the Canadian tour of the Quasar Saxophone Quartet.