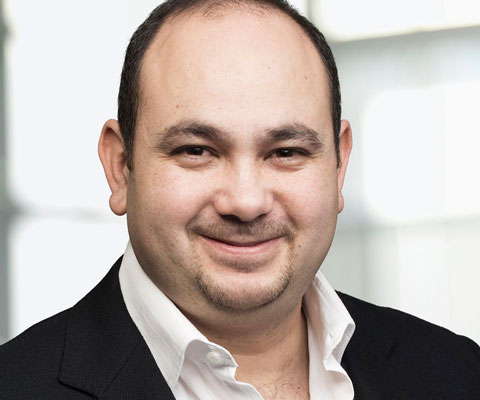 Digging up evolutionary secrets through the study of ants

The research of Ehab Abouheif, who was awarded a Guggenheim Fellowship in Molecular and Cellular Biology, is literally groundbreaking. Armed with a shovel, Dr. Abouheif has spent years digging up fields for his studies into the evolution of ants from the hyperdiverse genus Pheidole.

In ant colonies, ants develop into soldiers or minor workers depending on the food they receive as larvae. By applying high doses of hormone at a critical stage in the larvae’s development, Dr. Abouheif revived a third worker — the supersoldier — that was lost in this genus about 35 to 65 million years ago. In so doing, the lab showed how the right environmental triggers can harness dormant genetic potential — a breakthrough for evolutionary theory that also holds out hope for advances in fields as varied as medicine, biodiversity conservation and food security.

After earning his PhD from Duke University in 2002, Dr. Abouheif was a postdoctoral fellow at the University of Chicago and the University of California (Berkeley) between 2002-2004. Since joining McGill’s Department of Biology, he has received numerous national and international awards. In addition, he was the founding president of the Pan-American Society for Evolutionary Developmental Biology, and continues to serve on the executive council.  As a co-founder of the McGill Centre for Islam and Science, he has lectured widely on the struggle to reconcile Islam and evolution.

Among its funders, the Abouheif lab receives financial support from the Government of Canada through the National Sciences and Engineering Research Council, the Canadian Foundation for Innovation and Canada Research Chairs. The Guggenheim Fellowship will help Dr. Abouheif continue to provide research opportunities to senior students. As of early 2018, the Abouheif lab had five graduate and postgraduate members. Many lab alumni are continuing their research in labs or teaching positions around the world — from Spain and France to Mexico and Jordan.