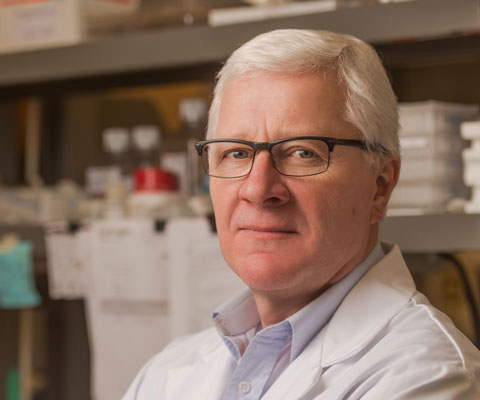 Uncovering the role of stem cells in treating leukemia

John Dick, who has worked in the Department of Molecular Genetics at the University of Toronto for 30 years, received the Keio Medical Science Prize for uncovering the role of stem cells in treating leukemia.

Researchers had long believed that stem cells might be present in cancer tissues, but the hypothesis remained unproven. Dr. Dick was the first to provide evidence that stem cells are present and active in leukemia. Building on this discovery, other researchers have shown that cancer stem cells play roles in solid tumours as well. In the words of the selection committee, “Professor Dick’s contribution is immeasurable, as he gave rise to the idea that cancer stem cells must be destroyed for cancer to be eradicated.”

Dr. Dick completed his undergraduate and post-graduate degrees in microbiology at the University of Manitoba before moving to Ontario. By 1995, he was a professor in the Department of Molecular Genetics at the University of Toronto, a position he continues to hold. In his early career, he held positions in the Research Institute Hospital for Sick Children and moved to the University Health Network in 2001. Dr. Dick is also Canada Research Chair in Stem Cell Biology; senior scientist at the Princess Margaret Cancer Centre and at the McEwen Centre for Regenerative Medicine, University Health Network, Toronto; and director of the Translational Research Initiative in Leukemia at the Ontario Institute for Cancer Research.

Dr. Dick’s lab receives financial support from the Canadian Cancer Society, the Terry Fox Foundation, the Government of Ontario through the Ontario Institute for Cancer Research, and the Government of Canada through Canada Research Chairs and the Canadian Institutes of Health Research. The lab has some 20 scientists and researchers among its members, has some 90 alumni.