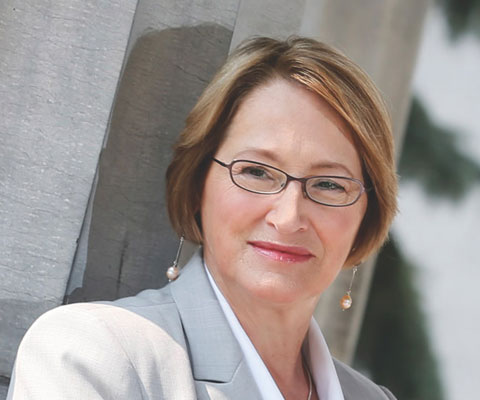 The greatest challenge for universities in a rapidly evolving social and economic environment is how to transfer knowledge and skills to students that will serve them long-term at a time when the pace of change is dazzling. McGill Principal Suzanne Fortier writes that the World Economic Forum-coined Fourth Industrial Revolution provides the perfect framework for that endeavour.

The Fourth Industrial Revolution, the theme of the World Economic Forum (WEF) in Davos, Switzerland last January, provides a compelling framework for leaders in Canada to plan for the massive transformations ahead. At the heart of the Fourth Industrial Revolution lies “a fusion of technologies across the physical, digital and biological worlds,” a fusion already emerging in many sectors, including the industrial, environmental, health and arts sectors. Its extraordinary possibilities have the potential to improve quality of life for many. However, as the founder of the WEF, Klaus Schwab, points out, the disruption could also lead to the loss of hundreds of thousands of jobs for less-educated people, and thus to possible increased economic and social inequality.

What will these momentous changes mean to Canada, its economy and its workforce? What will they mean for universities and the role they play in attracting and educating the people who will lead this revolution?

Reimagining a learning experience for students in a global, hyper-connected, highly competitive world of relentless churn and constant new opportunities is the biggest challenge facing universities today. Given the scale, scope and pace of change in the Fourth Industrial Revolution, forecasting the knowledge, expertise and skills needed in the future will become exponentially more challenging. As the WEF report The Future of Jobs: Employment, Skills and Workforce Strategy for the Fourth Industrial Revolution states: “The accelerating pace of technological, demographic and socio-economic disruption is transforming industries and business models, changing the skills that employers need and shortening the shelf-life of employees’ existing skill sets in the process.” In this new world, universities face the challenge of teaching students knowledge and skills that will allow them to be productive in jobs that we cannot yet even imagine, and to learn and create new technologies, business and social models for a future that we cannot yet fully envision.

While these issues preoccupy academic leaders, business leaders are eager to see new graduates coming out of our universities with an education aligned with labour market needs, ready to make a quick transition from study to work in diverse cultural and geographical locations. A learning experience that adapts and evolves in different time scales and cultural environments has thus become what our students need today.

Characteristics traditionally seen as the outcome of a good university education, such as acquiring deep expertise in a particular academic subject, developing strong analytical skills, and cultivating an ability to learn, are no longer sufficient.

Developing leadership and resilience, nurturing creativity and intellectual agility, and enabling hands-on experience early on, both locally and globally, are now essential components of a successful university education. In every university, dynamic new environments are emerging that provide a rich suite of experiences and extend learning well beyond the campus. Partnerships among the private, government and academic sectors are also contributing to building the launching pad needed for graduates to join the Fourth Industrial Revolution. A great example is the Canadian Business Higher Education Roundtable, a union of leaders in higher education and major corporations that has given itself the goal of providing access to work-integrated learning for every student in Canada.

In the Fourth Industrial Revolution, Canada’s strength will come from creative talent. The agility, inventiveness and adaptability of this talent will be key to allow our nation to compete in a world in permanent flux.

With the percentage of young university graduates in Canada hovering just above the OECD average, we will need to continue efforts to increase university participation.

In a society and economy fully anchored by knowledge, education will increasingly be a key factor in equipping citizens to adapt to changes and seize new opportunities. In addition, Canada faces a talent crisis due to an aging population. Over the next two decades, the segment of the Canadian population younger than 25 years of age is projected to grow by 13 per cent while the segment older than 64 years is estimated to increase by 72 per cent.

Fortunately, Canada has a long tradition of attracting students from all corners of the world to its universities, a good number of whom later choose to make Canada their home. 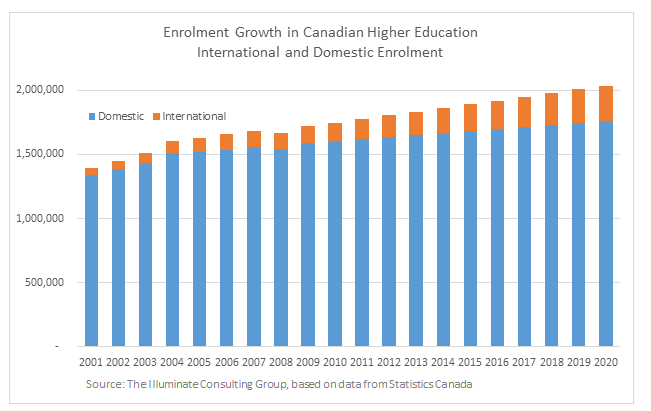 In 2013-14, according to Statistics Canada, Canada’s universities attracted 145,000 international students, a growth of 65 per cent in just five years. Bringing in talented people from around the globe is a winning proposition for Canada that does more than revitalize an aging population.

These international citizens also impart a global perspective to our academic environment – and in our communities. In learning and in research, students and faculty from different countries and cultures enrich the diversity of knowledge and the creativity of our thinking.

Our nation has the capacity and potential to attract talent from around the globe. Three of the world’s top 15 “Best Student Cities,” according to the QS World University Rankings, are in Canada. According to The Times Higher Education supplement, “the toughening of the immigration system” in England and “campaign rhetoric from Donald Trump” in the US could open up increased opportunities for Canada. And there is still room for growth. Students from outside the country comprise only 9 per cent of enrolment in higher education, which puts Canada at the OECD average. Australia, the United Kingdom and Switzerland boast nearly twice that percentage.

In Australia, international education is valued not only for its ability to enrich the academic environment and to provide a new pool of talent for businesses, but also as one of the country’s most important export clusters. With an economic impact of $17 billion in 2014, international education ranks as the country’s fourth-highest export industry, after iron ore, coal and natural gas, and as its most important service export.

According to Global Affairs Canada, international students collectively spent more than $10 billion in Canada in 2015. In contrast with Australia, Canada does not track international education as an export sector, and does not rank its relative importance in the economy.

The Australian experience holds an important lesson for Canada. While jurisdiction for education rests with the provinces, branding Canada as a place of choice for higher education will be essential to successfully compete for talent globally. Australia attained its exceptional growth in international education over the last three decades not by happenstance, but by strategic and deliberate effort.

The quality of our talent will be the deciding factor in determining whether Canada leads in this new era, and the competition for smart people will only intensify. Universities, businesses, not-for-profits and governments must work together to promote our country as an education destination and build the agility needed for Canada to succeed in the Fourth Industrial Revolution.