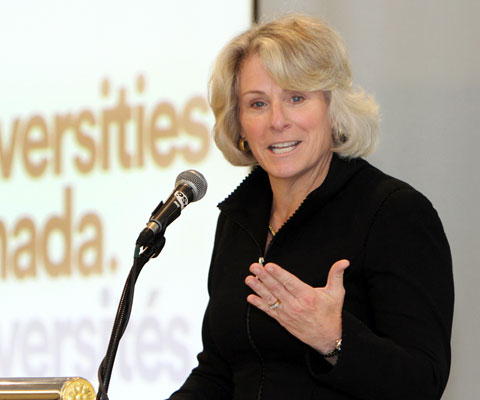 This op-ed appeared in the Calgary Herald on April 7, 2017

By Elizabeth Cannon, chair of Universities Canada and president, University of Calgary

The university research community didn’t get all it hoped for in the federal government’s new budget, but there are notable investments in higher education that will help set the stage for the years ahead.

These announcements add to last year’s investments of $2 billion for research spaces and infrastructure through the Post-Secondary Institutions Strategic Investment Fund (SIF) and $95 million more annually to the research councils in support of discovery research.

Now, Canadian universities are in anticipation mode. The report of the federal government’s fundamental science review will be released on Monday. The work of this panel of eminent research leaders, led by Dr. David Naylor, is expected to point the way to transformative re-investment in our research ecosystem and a stronger Canada.

The government referred to this report in Budget 2017, while also supporting key areas of Canadian research excellence such as artificial intelligence. Along with targeted reforms to broaden access to federal student aid, the government’s $221 million for research internships through the MITACS program is a major investment in young people, and an important step forward for the research community.

This new funding will more than double the amount of placements offered by MITACs, from 3,750 to 10,000. Work-integrated learning opportunities — like those offered by MITACS — help companies innovate and compete internationally, thanks to the skills that students and graduates bring to the workplace. They are also a crucial experience for young Canadians as they build careers in this rapidly-changing economy.

This budget also had significant investments in life-long learning to equip more Canadians with skills for a changing workforce, and in indigenous students, something for which Canada’s universities have long advocated. With $25 million over five years for Indspire, the national charity that funds scholarships for indigenous students, and $90 million for the Post-Secondary Student Support Program, this investment will help unlock the tremendous talent of indigenous youth by ensuring more go on to college and university.

Universities are also pleased to see Budget 2017 recognize global changes that provide a unique opportunity for our country. The Canada 150 Research Chairs will be a new international calling card for Canada, helping universities recruit top global research talent and advance our position as a research and innovation leader.

The major new funding for “superclusters” underscores the government’s holistic approach to spurring innovation through support for collaboration between higher education and business. Universities are hubs of research and innovation in fields such as agri-food, health and bio-sciences – areas that the federal government has identified as key to accelerating economic growth – and we will provide the talent, research partnerships and infrastructure necessary for thriving innovation clusters.

Canada’s innovation future – which gets much attention in the Budget 2017 storyline – depends in large part on how the government responds to the upcoming fundamental science review panel report, the first comprehensive look at our system in 40 years.

In an increasingly competitive global marketplace, Canada’s need is urgent. Between 2006 and 2013, research funding in Canada fell from third to eighth among OECD nations. We still have a long way to go to return to globally competitive levels. Yet right now, we have a singular opportunity to act with ambition for a generation, given threats to research funding south of the border and changing dynamics in the research landscape in Europe and the United Kingdom.

Canada needs sustained support for globally competitive research infrastructure, bold investments in discovery research, and greater support for international and cross-disciplinary research collaboration. Government action following the fundamental science review report will do much to shape the research and innovation landscape in this country for decades to come.

There is much at stake. This government knows how crucial research, innovation and higher education are to Canada’s future prosperity. That’s why they commissioned the science review panel – to make sure we have a system that works.

Canada can and must provide enhanced support to its top research and innovation talent. This upcoming report will provide the platform and guidance that the government needs to take strong and impactful action.

Universities across the country are setting their sights high, because that’s where Canada needs them to be.