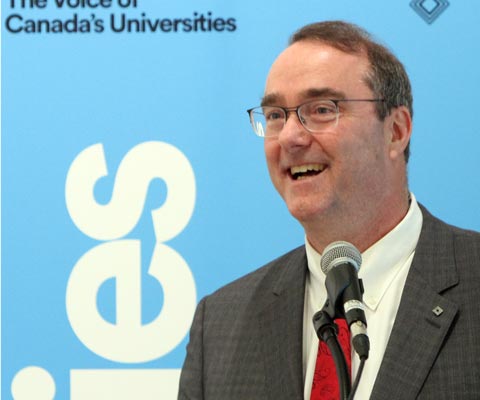 By Paul Davidson, president and CEO of Universities Canada

The Rio Olympics start in just over 100 days, and the world’s athletes have long been preparing for Brazil. So have Canada’s universities. But after the cyclists and swimmers and rowers and gymnasts leave Rio this summer, our universities will still be there, striving for outcomes that go well beyond the Olympic Games.

Despite recent political and economic turmoil, Brazil remains an important strategic partner for Canada, and our governments have been pursuing cross-sector strengthening of connections.

The university sector is leading the way.

Last month, nearly 100 participants from Canadian and Brazilian universities, colleges, government and industry gathered in São Paulo, Brazil to discuss the higher education and labour force needs of both countries. Co-hosted by Universities Canada along with Canadian and Brazilian partners, the event explored concrete opportunities for universities to work together through teaching, research and service functions to provide students with the experiences needed to become globally-competent.

It was but the latest in a series of initiatives designed to strengthen important ties with Brazil in higher education, research and innovation – ties which in turn pave the way for linkages in trade and diplomacy. In 2012, Canadian university presidents travelled to Brazil, using face-to-face conversations to build relationships and hands-on planning for future collaborations. The agreements signed during that mission involve investments of $1.72 million (CAD) from Canadian universities and $1.45 million from the Government of Canada. New scholarships and student mobility programs were valued at close to $1.71 million (CAD).

During the visit, led by His Excellency the Right Honourable David Johnston, Brazil committed to send up to 12,000 university and college-level students to Canada as part of Brazil’s remarkable Science without Borders program. Already, more than 7,000 Brazilian students have studied here. In just one example, hundreds of Brazil students arrived at Lakehead University’s Thunder Bay campus. Brazilian students now make up 31 percent of Lakehead’s international student body. As they head out on internships in Thunder Bay and surrounding communities, the students bring diversity and new international perspectives to city businesses.

Impressive results are being realized as our universities tap into Brazil’s specific areas of expertise. For example, Brazil is a world leader in agricultural research as well as clean energy, biofuels and oceans.

Professor Allan King works with the University of Guelph’s Ontario Veterinary College and has worked with Brazilian researchers since the 1980s.  He has seen a lot of changes. He notes that while we used to go to Brazil to teach basic techniques, we now go to learn advanced skills.

Brazil has become a world leader in reproductive biotechnology, particularly in the area of embryo transfer. King is the lead principal investigator in the North-South Reproductive Biotechnology Consortium, a collaborative group including researchers at Queen’s University, the University of Montreal, and Brazil’s Sao Paulo State University and Para State University.

McGill University researchers have established more than 50 collaborations with their Brazilian counterparts covering a diverse range of expertise from biofuels to dentistry. New partnerships are building on that, opening doors to a stronger global perspective.

In a bilateral exchange, the Global Institute for Water Security at the University of Saskatchewan has sent four doctoral students to Brazil to examine headwater regions in the mountains upstream of tropical Rio de Janeiro, while Brazilian students look at land-use change on water quantity and quality in headwater catchments in the cold climate Rocky Mountains.

The momentum is building; Brazil is ready to host our students there.

But there’s a snag; we haven’t yet seen the level of support and interest in sending our scholars abroad.

Just 3.1 percent of Canadian full-time undergraduates had a short-term international experience in 2013 and for those who did travel for study, the number-one destination was the UK. There’s more world to experience to further broaden our horizons. International student mobility creates global leaders out of graduates who have personal relationships with organizations in economies of strategic importance – and Brazil is high on that list.

We have much to learn from Brazil and a great deal to gain from collaborating with its government, businesses, universities and other organizations. Other sectors would do well to take advantage of the opportunities created by higher education and research linkages, including accessing new talent and opening up new markets.

Of course we aren’t the only country seeing the potential in Brazil; there is competition for those relationships. The U.S., for example is exploring agriculture and energy matters with Brazil. Brazil is Germany’s only strategic partner in Latin America. Canada will have to work hard to keep Brazil’s attention in the months and years ahead.

We’ve seen progress through higher education and research, and last month’s event was testament to Canada’s continued long-term interest and engagement in deepening collaboration with Brazil. Now it’s time to build on that success, and to leverage and expand those university relationships. There are broader benefits to be had – in education, trade and diplomacy – for the benefit of all Canadians.