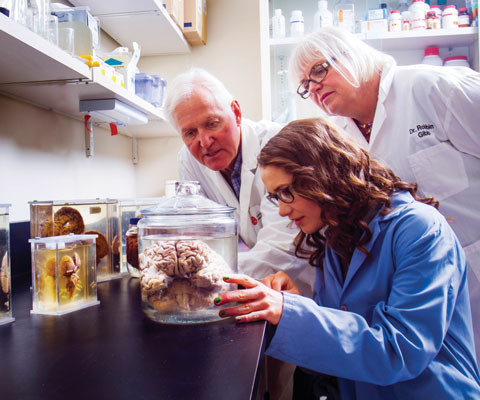 This op-ed was published in Research Infosource on November 16, 2017

As an undergraduate, Geoffrey Hinton wanted to understand the inner workings of the human brain. No existing field of study had the answers, so he built his own computer models to find them. Today Hinton is a world-leading computer scientist, an emeritus distinguished professor of computer science at the University of Toronto, vice-president engineering fellow at Google, and a Wired top 100 global influencer for 2016.

Hinton is an example of the kind of researcher the world needs to solve this century’s vast and complex challenges. I know our country’s universities are teeming with young researchers who have exactly the same potential. We have to do everything we can to ensure they fulfill it. We need more Dr. Hintons to secure our future prosperity.

It is today’s youth who will directly confront tomorrow’s biggest issues. The consequences of climate change will be theirs to manage. So will the impacts of global migration changes, automated labour and aging populations. It’s our responsibility to set them up for success.

Innovation starts with basic research, and takes time to flourish. While research into the force of electricity can be traced back at least to the turn of the 17th century, it was only in the late 19th century that electrical power was harnessed and put to societal and industrial use. The personal computer was introduced in the 1980s but achieved a “critical mass” of societal impact in the late 1990s. Geoffrey Hinton’s achievements in artificial intelligence — which today are making self-driving cars safer, simplifying language translation and automating home and work environments — have been more than 30 years in the making.

We need to create opportunities for young researchers to start asking questions today so they can pursue their curiosity and imagination. That means ensuring the funding and support are there to give this next generation access to hands-on experience and the guidance of mentorship.

To be sure, young researchers in Canada do receive some of these supports today. A major portion of federal research grants goes to graduate students. Yet despite this, Canada is falling behind.

Last spring’s report of the federally commissioned Fundamental Science Review — the Naylor report — revealed Canada lags after other OECD countries in real per-capita funding for independent or investigator-led research, which has fallen by 35 percent over the last decade.

While innovations may take years to mature and become embedded in society, the race to develop new ideas is moving at breakneck speed. This will only accelerate in a globally competitive knowledge economy. And if we cannot support and foster the development of young researchers and innovators here at home, they will go elsewhere. We can’t afford to give up our next generation of top talent.

It’s heartening to know that the majority of Canadians recognize this. In a 2017 Abacus survey, 93 percent of respondents agreed the federal government should make it easier for young researchers to get funding for their projects earlier in their careers. Similarly, 92 percent said they believe the government needs to support early career researchers to keep top talent on Canadian soil. That is a clear public mandate to invest in people and ideas, and provide more support to young researchers.

Now is the time to act on the Naylor report. It provides a comprehensive picture of what needs to be done — along with a clear road map. Now is the time to invest in the people and ideas that will build a stronger Canada. The innovations that will shape our lives tomorrow are borne out of research that begins today.

Canada’s universities look forward to Budget 2018 to deliver meaningful new investment in research for the benefit of all Canadians.

The Naylor report shows us the way.

← Previous
Investing in pure research is unpredictable but essential
Next →
Canada’s global moment: Students from around the world choose Canada