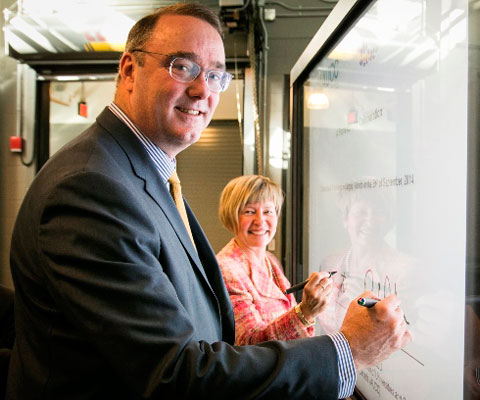 OTTAWA – Young Canadians will be the prime beneficiaries of a new partnership between the country’s colleges and universities. The framework for collaboration – signed today at SAIT Polytechnic in Calgary by Paul Davidson, president of the Association of Universities and Colleges of Canada, and Denise Amyot, president of Colleges and Institutes Canada – is designed to help Canada succeed in the global knowledge economy by addressing the need for advanced skills in all sectors.  Together, AUCC and CICan represent 228 postsecondary institutions serving more than 2.5 million students.

Participants at the signing ceremony included David Ross, president of SAIT Polytechnic, and Mike Mahon, president of the University of Lethbridge, co-chairs of a university-college presidents’ working group that developed the framework, as well as local students and staff; national student leader representatives; and local university, college and business leaders.

A high degree of mobility and pathways between postsecondary institutions in Canada is one of our country’s strengths, as noted by the OECD in its 2014 Education at a Glance report.  Building on this strong foundation, the new framework reflects the commitment of universities and colleges across the country to further enhance innovative programs and partnerships that offer Canadian students an effective continuum of choices leading to rewarding careers.  It also signals new avenues for collaboration by AUCC and CICan in communications, member initiatives and policy dialogue.

“Today’s students are preparing for a more global and complex world. This agreement demonstrates our shared commitment to equip them to achieve their goals in education and career-readiness,” says Paul Davidson, AUCC president.  “We need to develop the human potential of this country to its fullest extent and deeper collaboration between colleges and universities will help us get there.”

“Ensuring students have diverse options and pathways to education through enhanced collaboration between colleges, institutes, polytechnics and universities is what this agreement is all about,” says Denise Amyot, CICan president. “Improved transferability will also benefit learners by affording them more chances to participate in college/university partnerships, such as applied research, which delivers the skills needed by employers and communities.”

“We must continue producing an educated workforce to support industry across the country,” says David Ross, president and CEO of SAIT Polytechnic. “This historic agreement recognizes that connections between post-secondaries must be strong in order to support Canada’s ever-changing needs for diverse, advanced skills.”

“This agreement reflects universities’ and colleges’ commitment to innovate how we learn for the benefit of our students,” says Mike Mahon, president of Lethbridge University and co-chair of the university-college presidents’ working group. “We’re working together to ensure that all students –  including Canada’s Indigenous people and new Canadians –  have the pathways and tools they need to succeed in education and the labour market.”

About AUCC
As the voice of Canada’s universities at home and abroad, AUCC represents 97 public and private not-for-profit universities and university degree level colleges. A membership organization providing university presidents with a unified voice and a forum for collective action, AUCC has represented the interests of Canadian universities since 1911.

About CICan
Colleges and Institutes Canada is the national and international voice of Canada’s publicly supported colleges, cégeps, institutes and polytechnics. The association works with industry and social sectors to train 1.5 million learners of all ages and backgrounds at campuses serving over 3,000 urban, rural and remote communities. Colleges and Institutes Canada presently operates in 29 countries via 13 offices around the world.