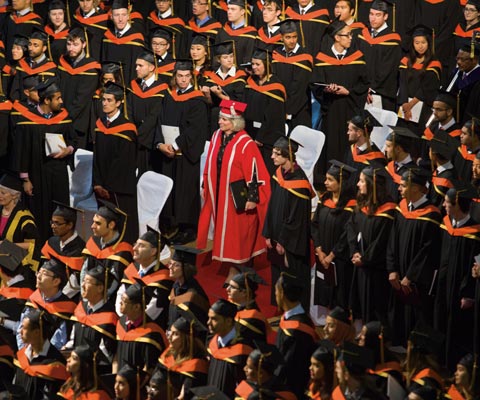 By Elizabeth Cannon, chair of Universities Canada and president, University of Calgary

One million students are taking notes, conducting research and interpreting texts on university campuses across Canada today, pursuing their undergraduate degrees. Among them are the soon-to-be sesquicentennial grads, our first foot into the next 150 years as a nation.

Next year, 2017, will be a benchmark for them. They’ll measure time and date their styles, music and cars by the year of their graduation.

Centennial graduates, who earned their parchments in 1967, may remember that they wore mini-skirts, paisley and bellbottoms, drove mustangs and cougars and listened to Lulu, the Boxtops and Bobbie Gentry. They’ll also remember the more permanent date stamps of Canada’s centennial. We built libraries, museums, arenas and the National Arts Centre in celebration. These monuments have been integral to Canadian life and learning over the past half century.

When we look back in 50 years at 2017, what will we remember? More bricks and mortar? Perhaps not. Rather, I think we’ll see the start of a new ambitious vision for Canada that has as much to do with building up people and ideas as it does the physical artifacts that place us in time.

We see this bold vision for the future – one characterized by innovation, prosperity and inclusion – articulated by our federal government. Universities share in this vision. Through nurturing discovery, sharing new knowledge and fostering the entrepreneurial spirit, universities are at the heart of innovation Canada. They bring ideas and people together, helping to find solutions to the challenges facing our communities and our country.

As they have always done, Canada’s universities will play a pivotal role in realizing ambitions for a more prosperous, innovative and inclusive Canada. Many of our universities pre-date confederation. And their commitments to students, to communities, to research and to our country endure.

Today, Canada’s universities are focused on mobilizing the talent needed to realize that hopeful imagining of the future. Last fall, universities outlined how they will do this through their renewed Commitments to Canadians. Included are commitments to provide diverse learning opportunities and partnerships with others to help all students achieve their potential.

As president of the University of Calgary, I know the importance of revisiting and reminding ourselves of the desired outcomes of education. There is a destination, for sure. But the journey is part of the outcome. The journey includes equipping students with the skills and knowledge they need to flourish, even if it won’t be on the exam. We do that through measured excellence locally and by international standards. We take learning to where it happens best – including into the community and the workplace – and how it happens best, whether that’s through hands-on experiences or the sharing of knowledge. And we put our best minds (students and faculty) on the world’s most pressing problems.

As a country, we have chosen higher education as a marker of national prosperity. Indeed, we all have a stake in students’ future contributions to Canada’s economic, social and intellectual success. Those students at work today need to know and feel that they are already part of the “real world” and a very real-world network. Universities serve as connectors and catalysts, bringing together ideas and resources from the private sector, government, colleges and community organizations.

When our newest grads look back on this significant academic year, they’ll remember a government planning for investments that look forward, investments designed to build a prosperous and inclusive future.

An increase in funding for research councils of $95 million a year, without specific targets, opens the door to allowing discovery to lead. Without discovery, we can be certain, there is no innovation.  At the same time, $800 million to support innovation networks and clusters speaks to the Innovation Agenda. The initiatives rely on each other.

Enhanced funding for students, including changes to the Canada Student Loan program, will improve access to higher education. I wonder if, in 50 years, some will remember 2017 as the year that the first in their family was able to enter university studies. It’s a powerful moment.

The federal government also committed to more support for Indigenous peoples related to education. These initiatives lay the groundwork for achieving potential, they make it possible to ensure fuller representation of Indigenous people in higher education, and they recognize that education is a pathway to prosperity.

Universities are uniquely positioned to make this new vision of Canada a reality. No person or community in Canada is untouched by the work of universities. And these kinds of investments pay off. Just look at the Canada Foundation for Innovation (CFI), now preparing for its 20th anniversary. A creation of the federal government, it was set up to build Canada’s capacity to undertake world-class research and technology development to benefit Canadians. That it has.

The CFI has made possible the University of Saskatchewan’s Canadian Light Source, Canada’s internationally renowned national synchrotron facility that has contributed to ground-breaking discoveries and advancements in health, agriculture, nanotechnology and natural resources. It also funded the Research Institute of McGill’s University Health Centre, where physicians and nurses work with researchers to understand diseases and develop new diagnostic tools and better therapies.

Those are practical examples. Sometimes we can’t imagine where discovery investments will take us. I can only imagine the discussions that went on when researchers applied for multi-million dollar support to send equipment two kilometres underground to study neutrinos. We know now that the results went as deep as the mine shaft. Dr. Arthur McDonald of Queen’s University and his University of Tokyo colleague Takaaki Kajita won the Nobel Prize in Physics for their work that showed neutrinos produced by the sun change identity on their way to Earth. The new knowledge brought no immediate practical application. We didn’t need it to. But now we can wonder about its effects on quantum computing or harnessing nuclear fusion or any number of areas of research that are made stronger by knowing.

That’s not to say that Canada should move forward with bold, new investments without a solid plan for the future. At work now are the Advisory Panel for the Review of Federal Support for Fundamental Science and the newly launched government Innovation Agenda. Universities are playing an active role in both processes. I’m pleased to be involved not only as a member of the Science, Technology and Innovation Council, but as a university president and chair of Universities Canada.

We expect the reviews to be coordinated and aligned, given that discovery research, applied research, talent mobilization, innovation and economic growth are intimately connected. Universities will encourage research funding at globally competitive levels. And they’ll seek greater support for interdisciplinary and international research collaboration.

Universities and the federal government share an ambitious vision: to develop a prosperous and just society, and a connected Canada that brings together the top minds and resources to address pressing national and international problems. We have all the right components to achieve that vision.

To kick off Canada’s sesquicentennial, Universities Canada will convene accomplished students from Canada’s 97 universities and other young innovators with forward-thinkers from business, government and community organizations at a national conference in Ottawa in February. They’ll share fresh perspectives on how to build an innovative, prosperous and inclusive Canada for the 21st century. Converge 2017, as it’s called, will explore Canada’s potential to be a model of equality, pluralism and prosperity.

Who better to welcome the next 50 years, than the youth who will one day look back and say, “It was an ambitious vision. And we got it right.”

← Previous
Three key steps to becoming an innovation nation
Next →
Science, technology, society: universities at the forefront of innovation