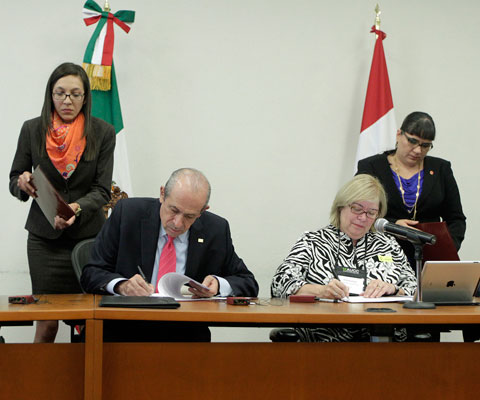 The five-year agreement aims to broaden Canada-Mexico cooperation in higher education in areas of information exchange, joint events, policy dialogue around internationalization and the promotion of two-way student mobility. AUCC and ANUIES have worked together since 2005.

A delegation of Canadian universities is in Mexico September 8 to 12 to reinforce existing research and institutional partnerships and bolster student mobility between the two countries. Led by AUCC and organized with strong support from the Canadian Embassy in Mexico, the delegation consists of presidents and senior representatives from 14 universities, as well as representatives from Mitacs, a Canadian organization that provides research internships and fellowships to university students, and Languages Canada.

Participating delegates from the University of Regina, Lakehead University, Université du Québec à Montréal and Mitacsalso announced new or renewed agreements with Mexican partners. The announcements include the launch of programs and scholarships to promote two-way mobility of Canadian and Mexican students for the purpose of academic exchange, language study, collaborative research, industry internships and strengthening linkages between our countries’ aboriginal and indigenous populations.