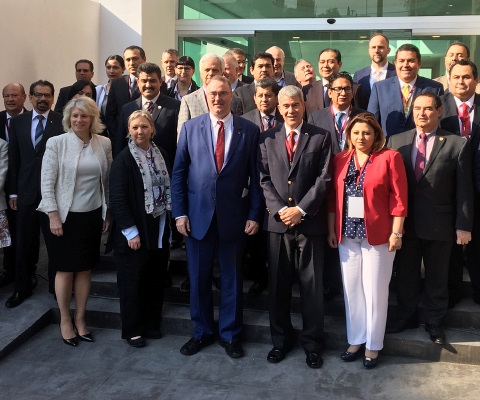 “Canada needs internationally adept students and researchers with the skills and competencies to navigate our rapidly changing global knowledge economy,” says Paul Davidson, president of Universities Canada. “The connections made this week reinforce our strong relationship with Mexico and will help bring even more Canadian talent to the world.”

The mission concluded with seven new memorandums of understanding, dealing with subjects ranging from collaborative diabetes research to expanding opportunities for international graduate research placements. Other highlights included in-depth discussions between Canadian and Mexican university leaders on reconciliation and Indigenous higher education, urbanization, energy and climate change issues, as well as a clarion call from Mexican partners for Canada to send more students to study in their country.

Mexico is one of Canada’s most important commercial partners and a priority country in Canada’s International Education Strategy and Global Markets Action Plan. In 2015 (the last year Statistics Canada data is available) Canada welcomed more than 1,500 Mexican university students to campuses across the country. Last year, there was a 16 per cent increase of Mexican study permit holders at all levels of education in Canada.

The mission builds on a longstanding and increasingly close relationship between Canadian universities and Mexico. Universities Canada led a senior university leaders’ mission to Mexico in 2014, renewing a five-year partnership agreement with its Mexican counterpart, the National Association of Universities and Institutions (ANUIES).

View more information, a full list of participants and photos of the mission.

← Previous
In an age of disruption, community–university collaboration is a must
Next →
Canadian students, researchers key to ties with China