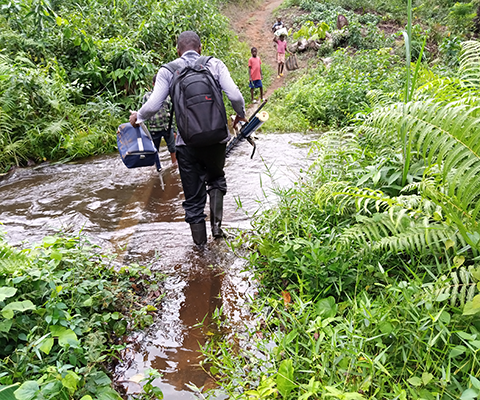 Research shows that international scholarships can enhance intercultural competencies, strengthen global citizenship and build leadership. However, less is known about the professional and career benefits that participants experience after completing these programs. For instance, do international experiences impact participants’ professional achievements or shape career trajectories?

With the support of the International Development Research Centre (IDRC), Universities Canada is conducting a research project to explore just that: What is the impact of international mobility programs on participant career paths, skills and community involvement? The study also aims to reveal best practices for designing equitable and inclusive international research programs.

The Queen Elizabeth Scholars – Advanced Scholars (QES-AS) is one such program that gives young scholars and early career researchers the opportunity to collaborate on their research internationally. As the ideal program to inform research on international mobility, Universities Canada analyzed the experiences of former QES-AS scholars and participating universities and institutes to determine its impacts on individuals, organizations and communities.

The early results? Many former QES-AS scholars report diverse and impressive professional accomplishments and career benefits they attribute to the program. Despite the challenges brought about by the COVID-19 pandemic, participants authored publications, presented research findings, gained international exposure for their work and experienced both academic and career advancement. Hear the stories of a few scholars below. (Note that their names have been changed and certain details have been omitted to maintain confidentiality.)

QES-AS scholar and graduate student, Bala, travelled across the world to spend several months conducting his research in Canada. With the guidance of his supervisor, he learned how to work effectively with industry and about the different models of public/private partnership in Canada. This new knowledge transformed the way he thought about research collaboration and allowed him to form meaningful partnerships later in his career.

Due to the pandemic, Bala was required to return home early, before completing his research. Despite this bump in the road, he continued his work with ongoing, online support from his supervisor in Canada and his fellow QES-AS scholars. His international experience and newfound support networks helped him achieve his goal of completing and publishing his research in a reputable journal, as well as presenting it at an international conference. Now, Bala enjoys higher recognition and a good reputation in his field of study.

Given his success, he went on to publish two more joint manuscripts and now works at a highly-ranked university in his home country. He credits his remarkable career advancement to his QES-AS experience.

Because of QES and exposure which I got at [my Canadian host university]… I got a job at [a university in my home country]…[It] was because of those experiences I got the job.

Looking forward, Bala intends to continue furthering his research. He currently leads a research team and modelled his new lab after the one at his Canadian host university. His lab developed and patented a new technology, and received funding to collaborate with a company who will help produce it.

Another QES-AS scholar, Claudia, arrived in Canada to conduct her research just a few months before the pandemic. This posed some serious challenges, as her university campus was forced to close and labs became backlogged. However, she persevered and used the time during lockdowns to complete data analysis and writing—an investment that paid off. During this time, she formed valuable connections with American researchers working on a similar project and managed to present her findings in several papers and academic presentations.

Thanks to her new network in the states and her research success, Claudia was inspired to pursue a post-doc in the USA after completing the QES-AS program. Upon return to her home country, she obtained a more senior position at her university, which she credits to these experiences.

I think [the QES-AS program] helped me to get a better position, [a] permanent position, as a researcher.

For Liam, the QES-AS experience had an astounding ripple effect on his professional reputation and career. Despite publishing his research from the program a few years ago, he remains recognized for it and continues to receive invitations to present his work to international audiences at top institutions.

Liam’s outstanding research and international exposure caught the eye of his government, who has asked him to expand his study nation-wide. Once completed, his findings will be presented to top policymakers, including those working in the ministry and the nation’s president. It has the potential to effect change throughout his home country.

Initial data from Universities Canada’s study on QES-AS experiences shows how transformative international mobility scholarships have been to the lives and livelihoods of participants. The networks of people, newfound skills and international exposure have helped springboard many in their careers and expand their horizons of what’s possible.