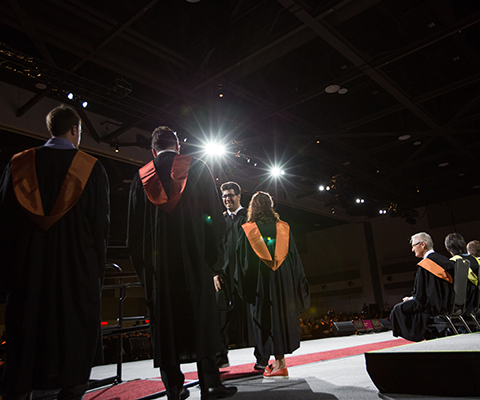 Bachelor of Arts in English (hons), University of Toronto

The famous novelist, poet, literary critic, environmental activist, and teacher has published more than 50 books—the most famous of which, The Handmaid’s Tale, has even been turned into a TV series. Atwood graduated from the University of Toronto in 1961. She has received the Booker prize twice for her works, along with several awards including the Franz Kafka Prize, Trillium Book Award, Governor General’s Award and the Los Angeles Times Book Prize.

Hansen earned his degree from UBC in 1986 and was the first person with a physical disability to graduate with a degree in physical education from the university. Since then, he’s been a famous advocate for inclusivity and for people with disabilities. The Rick Hansen Foundation, established in 1988, has raised millions and impacted people with disabilities through special programs, grants, research, online tools, and inspirational speaking events. UBC graduate students with a physical disability can apply for the $16,000 Rick Hansen Man in Motion Fellowship.

Bachelor of Kinesiology with distinction and M.D. degree, University of Calgary

Hayley Wickenheiser is best known as a five-time Olympic medallist and seven-time World Championship medallist in ice hockey, but most recently the Hall of Famer was able to add M.D. to her credentials. Wickenheiser is doing her residency at a Toronto hospital in the emergency department, while also serving as the senior director of player development for the Toronto Maple Leafs. The Faculty of Kinesiology at UCalgary created a scholarship in Wickenheiser’s name for varsity women athletes.

After graduating from Concordia, Porowski moved to New York to study acting. While working on his acting career he worked in restaurants to pay the bills and developed quite a talent. In 2017 Porowski was hired as the food and wine expert for Netflix’s revival of Queer Eye. In June Porowski announced he is part of the new Equaversity Foundation, established to organize international fundraising to support the LGBT+ community in Poland.

Prior to getting into politics the Canadian Prime Minister received degrees from two universities. After acquiring his BEd Trudeau worked as a teacher in Vancouver, B.C. teaching French and Math.

Bachelor of Science, Doctor of Philosophy in Science, University of British Columbia

In November Dr. Cullis was named co-winner of the 2021 Prince Mahidol Award for medicine. The award is one of the first high-profile international science prizes to acknowledge the pioneers behind mRNA vaccines – the most effective defence against COVID-19. Acuitas Therapeutics, a UBC spin-off company co-founded by Dr. Cullis, developed the lipid nanoparticle technology that allows the Pfizer-BioNTech mRNA vaccine to enter human cells.

Bachelor of Philosophy, University of Ottawa

Before he became the long-time host of Jeopardy, Trebek was an ardent supporter of the garnet and grey (University of Ottawa). Trebek received an honorary doctorate in 1997 and in 1998 was awarded the Meritas Tabaret Award for Alumni Achievement, the highest award of excellence given to a uOttawa graduate. The Alex Trebek Innovation and Challenge Fund, established in 2011, helped members of the uOttawa student community improve society in Canada and around the world.

As a student athlete at Carleton Horn-Miller, a Mohawk from the Kahnawà:ke Territory near Montreal, earned recognition for her prowess as a member of the women’s water polo team. Horn-Miller went on to win gold at the 1999 Pan-Am Games and co-captained the Canadian team during the 2000 Sydney Summer Olympics. Empowering communities and youth to proactively overcome adversity is part of the advocacy work currently done by Horn-Miller.

The 18th Prime Minister of Canada has fond memories of his time at St. FX where he studied Political Science. It’s there he says that he learned about the power of ideas to transform our country, from one century to the next.

Sir Frederick Grant Banting was a Canadian medical scientist, physician, painter, and Nobel laureate noted as the co-discoverer of insulin and its therapeutic potential, including for treating diabetes. In 1923, Banting and John Macleod received the Nobel Prize in Medicine. Banting, who was 32, remains the youngest winner of the Nobel Prize in Physiology or Medicine. In addition to his medical degree, Banting obtained seven honorary degrees from universities in Canada and the United States.

A member of the Innu nation from Uashat, Quebec, Fontaine is noted as one of the most prominent First Nations writers in contemporary francophone Canadian literature. Her 2011 debut novel Kuessipan received an honourable mention from the Prix des cinq continents de la francophonie in 2012. The novel was adapted by Myriam Verreault into the 2019 theatrical feature film Kuessipan.

Liu initially worked as an accountant, but quickly discovered he had other passions and pursued a career as an extra and stuntman in television and movies. The Canadian actor is best known for his portrayal of Shang-Chi in Marvel’s 2021 release of Shang-Li and the Legend of the Ten Rings.