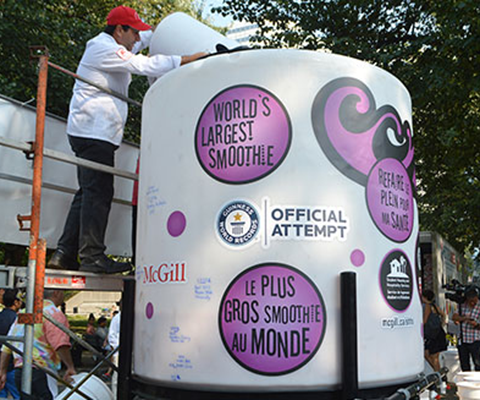 Some of the wildest world records were achieved at universities in Canada.

During McGill University’s Frosh Week in 2015, over 100 university staff and student volunteers created the largest smoothie ever at 3,121.7 litres. That’s enough to fill up an average car gas tank 62 times!

The event was done to promote healthy eating at the university’s annual food fair and contained locally sourced ingredients: 170 watermelons, 400 cantaloupe melons, 50 cases of bananas, 950 containers of yoghurt and thousands of fresh berries.

Scientist and postdoc Mohamed Rezeq, at the University of Alberta’s National Institute for Nanotechnology, created a tungsten needle that, at its finest tip, is the thickness of just one atom. Tungsten, a rare and extremely tough metal, was molded using nitrogen and electric voltage. This breakthrough technique, announced in May 2006, should allow for the construction of advanced super high-resolution electron microscopes.

An unusual student club at the École de technologie supérieure, Omer, is  where students design and manufacture human-powered submarines. Established in 1990, the club is a leader in its field and holds over a dozen speed records. The most recent world record was broken by the submarine OMER 5 in 2007, with a top speed of 8.035 knots (14.9 km/h or 9.2 mph). This astounded many long-time enthusiasts, who long thought the 8-knot barrier to be unbreakable. 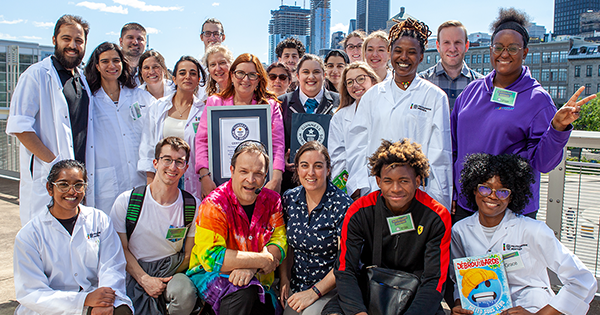 Many of us will remember making slime as children, but few of us have broken a world record at the same time! Earlier this summer, Polytechnique Montréal’s Chemical Engineering Department partnered with the Centre des sciences de Montréal to host the largest slime-making lesson ever.

The event invited families with young children to learn about the science behind making slime, including what a polymer is, how to identify a non-Newtonian fluid and what makes slime sticky. Participants had a blast creating their own slime while also setting a new Guinness World Record. 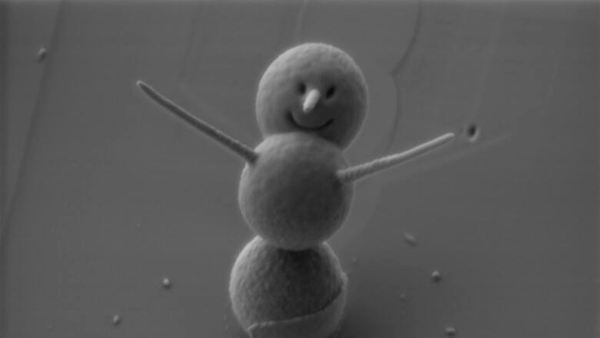 Todd Simpson, a scientific researcher at Western University, has turned a classic Canadian pastime into a world record. He created a snowman that stands less than 3 microns tall—smaller than the diameter of human hair, which is about 50 microns.

Though there was no magic or snowball rolling involved in its creation, it required the use of specialized equipment and expert skills. The snowman’s body first appeared as a mistake during an experiment, sparking Todd’s inspiration to transform it into the jolly holiday figure we all know.

Inspired by classic zombie attack films, Ottawa-based graduate students and mathematicians published the first mathematical investigation of a zombie attack. Though the concept sounds frivolous, their work is a display of rigorous math, statistics and models used to analyze disease infection rates and spread.

In the unlikely case of a zombie attack, the authors concluded the undead would outnumber other city residents in a matter of three days and the only way to overcome such an outbreak would be to “hit hard, and hit often.”

Etched using an ion beam at Simon Fraser University, the smallest book ever made, Teeny Ted from Turnip Town, measures just 70 by 100 micrometres. For context, a micrometre is at the limit of human vision and about the size of a thin piece of paper.

Costing $15,000 to make, the book is carved on pure crystalline silicone pages. You’ll need a scanning electron microscope to read it!