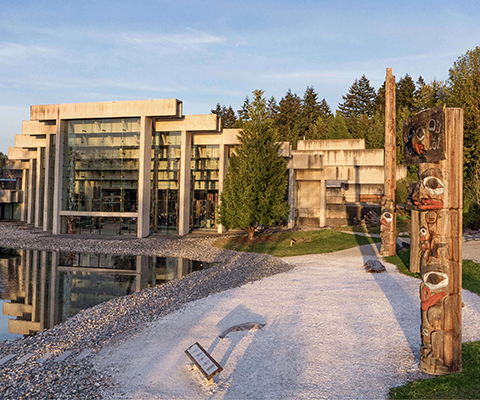 The University of British Columbia's Museum of Anthropology

Discover interesting artefacts and exhibits in these university museums.

Known colloquially as Agnes practically from the moment it opened in 1957, Agnes Etherington Art Centre is one of the largest art galleries in Ontario, with over 17,000 works in its collection. The exhibits, some of which have won awards, include Canadian historical, Indigenous, contemporary, European historical and African art.

The origins of the museum can be traced back to the first half of the 20th century, when longstanding patron of the arts, Agnes Etherington, opened a summer school for artists in Kingston. After her death, she donated her home to Queen’s University on the condition they open an art gallery in it. Today, the gallery remains an active pedagogical resource for students.

The University of Saskatchewan boasts the only prime ministerial centre on a university campus in Western Canada. This museum, dedicated to Canada’s 13th Prime Minister John Diefenbaker, contains replica rooms of the Prime Minister’s Office and Privy Council Chambers as they would have looked while he was in office. The centre hosts a permanent exhibit on Diefenbaker’s life and career, as well as temporary exhibits on a variety of topics, such as women in STEM and cryptology.

The idea for the museum came from John Diefenbaker himself, after being inspired by the Harry S. Truman Presidential Library and Museum in the United States. The centre was inaugurated a year after his death.

The Ed Leith Cretaceous Menagerie is a small museum at the University of Manitoba dedicated to the Cretaceous period and Manitoban archeology. It contains full-sized replica skeletons of four creatures from that time period: the Gorgosaurus, Archelon, Xiphactinus and Platecarpus. It also includes a display of local fossils and a panel about Ed Leith, a geology professor at the university from 1935 to 1971, who continued to contribute to the university until his death. The museum was named in his honour in 2003.

Named after one of Canada’s first female doctors, the Maude Abbott Medical Museum has been around almost as long as the university that hosts it. In fact, the first items for its collection were obtained in 1822. They consist primarily of anatomical specimens that could be used to teach medical students about the physical characteristics of various illnesses. Among the most famous is the Holmes heart, a 200-year-old heart with only three chambers instead of four. Along with materials from the 19th and 20th century, the museum documents the teaching of medicine at McGill University over the past two centuries.

The museum is also host to other exhibits and collections, such as one on health care post stamps, as well as Maude Abbott’s personal collection of animal specimens with cardiovascular anomalies.

Museum of Antiquities (University of Saskatchewan)

The University of Saskatchewan’s Museum of Antiquities is home to an impressive collection of replicas of artefacts from the Louvre, the British Museum, the Museum of Antiquities in Delphi, the Acropolis Museum in Athens and the Staatlichen Museen in Berlin. The items replicated in the museum date back thousands of years, and include Greco-Roman sculptures, as well as Near Eastern, Egyptian, Byzantine, Islamic and Medieval art. In addition to the replicas, the museum has original artefacts such as coins, glass and pottery. It aims to highlight the progression of sculpture and art in the ancient world.

The museum offers volunteer opportunities to students wanting to learn more about its operations and organizes summer camps for kids.

Museum of Anthropology (The University of British Columbia)

The Museum of Anthropology at The University of British Columbia is a research and teaching museum, renowned for its works by First Nations of the Pacific Northwest, which make up its main focus. Founded in 1949, it houses nearly 50,000 ethnographic objects from around the world, including totem poles, ceramics and textiles. The Laboratory of Archeology, located in the same building, has another 535,000 items in their collection.

In addition to its permanent and temporary exhibitions, the museum also boasts state-of-the-art research facilities and conservation labs, as well as a library and archives department. Most of its artefacts are also available to view online for those unable to visit in person.

Located in Dalhousie University’s Life Sciences Centre, the Thomas McCulloch Museum is home to a collection of mounted birds dating back to the 19th century. These birds, which are the primary focus of the museum, were prepared by the university’s first principal, Thomas McCulloch, who believed in using natural specimens to teach at the school he opened in Pictou, Nova Scotia. Today, the birds are still available to science, history and art researchers who wish to study them.

In addition to the mounted birds, the museum houses a collection of fossils, seashells, mushrooms, beetles, butterflies and fish.