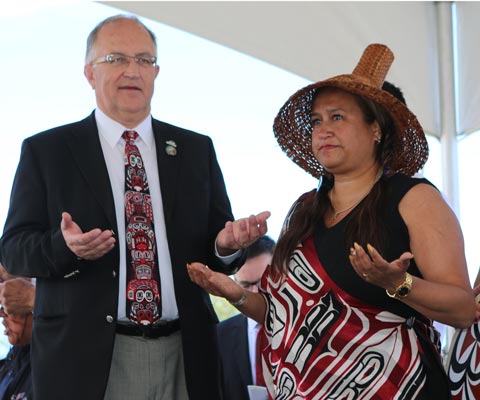 By Ralph Nilson, president and vice-chancellor of Vancouver Island University

Last December’s final report of the Truth and Reconciliation Commission mapped out a new relationship between Canada’s Indigenous and non-Indigenous peoples. The country’s universities not only have a key role to play in turning that map into a living, breathing reality but also the moral, social, cultural and economic imperative to do so.

Canadians want this new relationship. And as we see in Budget 2016, the new federal government is committed to helping make it happen.

An investment of $8.4 billion over five years promises transformational change. Support is coming for education, infrastructure, training and other programs that will directly contribute to a better quality of life for Indigenous peoples and build a stronger Canada.

Billions of dollars have been earmarked to improve fundamental needs such as clean drinking water, adequate housing and health care on reserves and in Inuit and northern communities. The government is also making substantial investments in primary and secondary education on reserves, totalling $2.6 billion over five years, with an important promise to improve the education system “through a respectful process of consultation and partnership with First Nations.”

University leaders across Canada welcome these investments as an important pathway to closing Canada’s education gap. Today, only one in 10 Indigenous adults has a university degree. The ratio among non-Indigenous Canadian adults is one in three.

The government has promised to work with students, parents, educators and Indigenous groups to explore how to ensure that students wishing to pursue postsecondary studies have the resources and supports they need to do so.

At Vancouver Island University, we have increased the number of our Indigenous faculty, funded aboriginal research chairs and drawn on the knowledge and teaching skills of Indigenous elders. We offer academic programs that reflect Indigenous history and experience. When former national chief of the Assembly of First Nations Shawn A-in-chut Atleo was appointed chancellor in 2008, he became British Columbia’s first Indigenous chancellor.

Real change and renewal require dialogue between communities. And when that dialogue is active and engaged, everyone benefits. That’s why nearly three-quarters of Canadian universities partner with local Indigenous communities, providing educational support and mentorship as early as elementary school. In turn, the universities benefit from the traditional knowledge of elders and other community leaders.

Our university fosters dialogue with Indigenous elders and artists on and off campus, and is extending that engagement to the wider community — for example, through co-sponsorship of a series on First Nations issues for the CBC Radio Ideas program. Our outreach programs, in partnership with community colleges, help First Nations youth access and prepare for a university education.

Greater access to university education will change the lives of Indigenous youth, and it will change Canadian society. The meeting of Western and Indigenous knowledge on campuses has the power to open dialogue between cultures. As Indigenous university grads enter more and more professions, stereotypes fall away. I see this process occurring every day.

I’m heartened by the commitment of the government of Canada to advancing the goals of reconciliation and creating more opportunities for Indigenous learners.

Over the next two decades, we will need a new pool of educated workers — as the number of retirees doubles while the number of working-age Canadians grows by just eight per cent. Indigenous youth can help fill that gap, provided they can access postsecondary education. According to federal government estimates, more than 70 per cent of jobs created in the coming decade will require postsecondary education.

Reconciliation, transformation — these are big projects. But in communities and on campuses across the country, they are beginning. The framework is in place; all the partners are aligned; and increasingly, postsecondary education is the aspiration for Indigenous youth.

True equality of opportunity will require sustained effort and commitment for decades to come. It’s a long road, but already it’s enriching all of us.