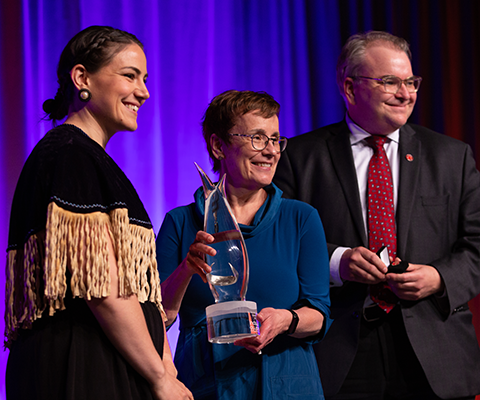 The Indspire Awards represents the highest honour the Indigenous community bestows. Over its 29 years, 396 First Nations, Inuit and Métis individuals have received the award for their outstanding achievements and contributions to their communities.

Dr. Trimbee’s impressive career has been accentuated by a strong commitment to public policy and public service. Over the course of her 28 years in Alberta’s civil service, she was responsible for three different government departments as Deputy Minister, where she became well-known for her strategic thinking and ability to drive transformational change.

Following her enormously successful career in public service, Dr. Trimbee was appointed president and vice-chancellor of the University of Winnipeg in 2014, where she led the institution on a journey of transformation over the ensuing six years.

Dr. Trimbee credits her Métis grandmother with shaping her identity today. Now equipped with a stronger understanding of her Métis heritage, she is proud to lead institutions committed to reconciliation and inclusivity.

“Annette is an inspiration, a mentor and a champion for women—Métis women in particular. I would like to underscore Dr. Trimbee’s commitment to advancing Indigenous equality in society, and especially within higher education. For her longstanding engagement and commitment in Alberta, Manitoba and elsewhere we are thrilled to see Annette recognized with this Indspire Award.” – Paul Davidson, Universities Canada president