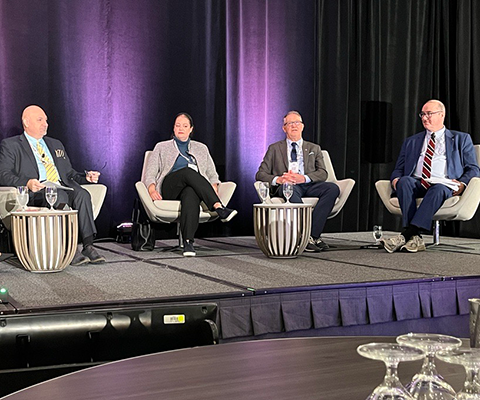 The Pie News covers news and events for the international education sector, and this two-day event convened prominent voices from across North America’s post-secondary institutions, the private sector and government.

As a leading voice within the post-secondary sector, Davidson spoke on a number of topics including the importance of Canada remaining competitive within the global international student market and the need for improved study permit processing.

Data from a 2022 Statistics Canada study showed that international students are a growing source of labour for the Canadian economy that extends well beyond their periods of study. The study shows that about 75 per cent of Post-Graduate Work Permit (PGWP) holders are employed, their median income has increased from 2008 to 2018, and almost 75 per cent of all PGWP holders became permanent residents within five years of receiving their permit.

“International students are also a crucial part of Canada’s research and innovation ecosystem,” said Davidson. “Our ability to conduct research and make new discoveries that will strengthen our economy is dependent on a steady flow of top international talent.”

Canada is known for its world-class institutions and considered a top destination for study. Davidson also noted the importance of increased federal government investments in the International Education Strategy to meet increased competition from other countries for talent.

← Previous
St. Mary’s University joins Universities Canada
Next →
Canada’s universities call for investments in people and ideas for the benefit of all Canadians