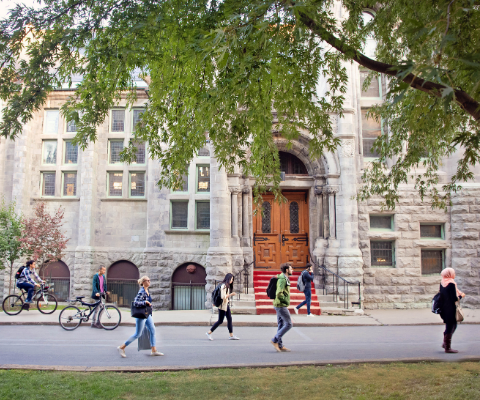 This op-ed was published in the Montreal Gazette and La Presse+ on October 30, 2020.

They say absence makes the heart grow fonder, and these days one thing we sorely miss is the spirit of Montreal as a university town. Not that the city’s academic institutions have ground to a halt or even shifted into low gear. Far from it! But the extraordinary vibrancy of university life is not evident the way it was when our campuses hummed with the energy of thousands of students, faculty and staff.

Yet in these dark times, the pandemic has shone a ray of light on the vital role played by science and knowledge, and by the universities where they flourish. Since early this year, we have seen unprecedented international co-operation among researchers working to understand the nature of the coronavirus, investigate the means by which it spreads, and develop vaccines to fight it. Experts have also been tackling the many challenges posed by the public-health crisis, such as mitigating the effects of the lockdown on the population.

Montreal is in the thick of this worldwide collaborative endeavour. It ranks first among Canadian cities for research intensity, and its research ecosystem, built around 11 universities and three teaching hospitals, is supported by major investments from research funding agencies. Montreal research teams are thus hard at work on reducing the impacts of the pandemic.

But those impacts do not fall equally on all segments of society. From a public-health standpoint, older people have been the primary victims. From a financial standpoint, young people are at risk.

Paid internships in public, private and community organizations are an effective response to this situation, for students in general and for international students in particular. Internships represent a key aspect of their Quebec experience and can be a decisive factor in the decision to stay in Montreal and contribute to its growth.

We must recognize that there will be no going back to the way things were. From now on, the digital shift, telework, e-commerce and many other consequential trends will be part of our daily lives.

The universities we lead will be there to help the Greater Montreal community adapt to these changes after the pandemic, just as they are now, and even to seize the opportunities they afford.

To take full advantage of what our universities can offer, we must call on our researchers to help answer the difficult questions we will face. With their deep expertise and extensive connections to international knowledge networks, our professors and researchers can make an important contribution to meeting such challenges as redesigning cities to deal with post-pandemic realities, preparing our response to climate change, accelerating the ethical deployment of technology in the economy, and redefining rules of community life at a time when we can no longer tolerate structural inequalities and systemic racism.

Collaboration between Montreal’s universities and the community should also be pushed further. For example, Montreal’s new urban plan, which is currently on the drawing board, could attempt to enhance synergies between university campuses and the surrounding neighbourhoods. The municipal and borough governments in the Greater Montreal area could establish more partnerships with our university teams and transform the urban area into a living laboratory where the results of applied research can be tested.

Sooner or later, Montreal’s university campuses will come back to life, along with the rest of the city. Part of what makes Montreal so vibrant is the energy imparted by our universities and their 200,000 students, including 35,000 international students. Let’s take advantage of them. Let’s use our universities to restart Montreal.

← Previous
When the world shut down, our universities reached out
Next →
Capilano University joins Universities Canada