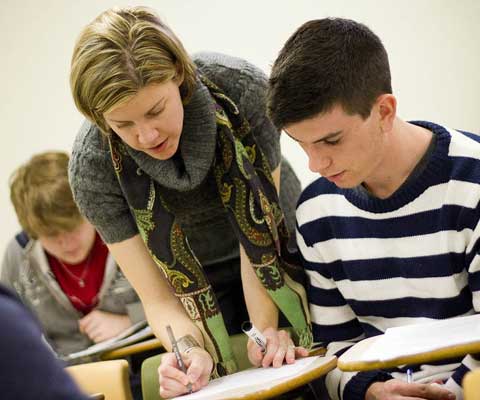 Ottawa, May 16, 2017 – A letter of intent signed this morning at the French Embassy in Ottawa by the Conference of University Presidents (CPU), the Association des collèges et universités de la francophonie canadienne (ACUFC) and Universities Canada addresses both the growing need for French-language teachers in Canada and the necessity of increasing professional opportunities for students studying for a degree in French as a foreign language in France. This agreement will encourage Canadian students in French-language teaching and francophone programs to study or work in France.

The agreement will also encourage students and graduates of French-as-a-foreign-language teaching programs in France to come to Canada. After completing the required supplemental training in a Canadian university and meeting the accreditation standards specific to each province, they could hold positions as primary or secondary French-language teachers in francophone institutions or schools offering French immersion programs.

This initiative will pave the way for collaboration among the leaders of 34 French and Canadian universities, delegates from several provinces, and representatives from the governments of Canada and France. As an outward-looking country, Canada is a destination of choice for international students. This initiative will enhance the synergy of exchange that already exists between Canada and France, notably the special agreement on youth mobility signed last year.

“We are delighted with this historic declaration, which was designed to address the lack of teachers in French-language schools and others featuring French immersion programs in the country’s minority French-speaking communities,” said Allister Surette, co-chairman of the ACUFC and president of Nova Scotia’s Université Sainte-Anne. Canada’s Francophone universities are pillars of the communities they serve and substantial contributors to their social, cultural and economic development. “The partnerships and agreements between French and Canadian universities which will emerge from this letter of intent are sure to be beneficial not only for our educational establishments but also for the communities where we live and work.”

“As a major player on the international scene, Canada greatly values its partners and simply cannot afford to stop looking outside its borders,” said Dominic Giroux, vice-chair of the Universities Canada board of directors and president of Laurentian University. “It is crucial for our future on the world stage to provide students with a chance to study and work overseas and form bonds with people worldwide. We sincerely believe that this memorandum can contribute to the development of teaching in French and the French language in Canada by fostering student mobility between our two countries.”

About ACUFC
The ACUFC, Canada’s association of francophone colleges and universities, represents 21 francophone or bilingual postsecondary teaching establishments outside Quebec. Its objective is to improve access to high-quality postsecondary education in French across the nation and thus stimulate the visibility and vitality of French-speaking communities and of Canada’s francophone element as a whole. The ACUFC represents the common interests of its members both in Canada and abroad. To find out more, go to www.acufc.ca.