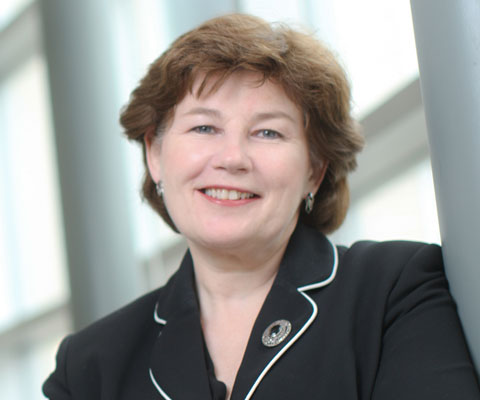 At its spring convocation, St. Thomas ‍Uni‍‍versity president Dawn Russell spoke to 395 graduates about their future. This is an edited version of her remarks.

In Alice in Wonderland, Alice asks the Cheshire cat: “Would you tell me which way I ought to go from here?”

I expect many graduates are asking the same question today. The Cheshire cat’s answer was: “that depends a good deal on where you want to go.”A simple answer, yet full of wisdom.

It’s natural to worry about the future, but don’t just worry, don’t wait for another to determine your path, create it for yourself. Determine the direction you are going to take. You now have a world-class education – the skills and the knowledge – to do so.

As president and as a professor who taught for more than 25 years, my greatest pleasure has been witnessing the conferral of degrees on students at convocation. The quality of our graduates always fills me with hope for the future.

St. Thomas is known for educating informed, engaged citizens who are involved in their communities. A Canadian survey on graduate outcomes found that STU graduates have significantly greater engagement than their peers with civic issues, as well as issues such as environmental sustainability and social diversity. STU grads are also more likely to support community causes. They will become more involved in social justice and human rights issues.

A STU education is key to those positive outcomes.

When student voices are heard, STU is a leader in Canada. In Maclean’s “Students Speak Out,”STU was No. 1 in Canada on the writing ability indicator, No. 2 in Canada for helping developing strong critical thinking and problem-solving skills, and No. 5 in Canada for professors“who know your name.” That is why Premier Gallant proudly said STU was “small but mighty”when speaking at the Toronto Club.

Graduation is the beginning of a new chapter in your lives, a time to celebrate your accomplishments, to consider your future.

And there is great news about your future.

A recent Maritime Province Higher Education Commission outcomes survey showed that five years after graduation, 95 per cent of humanities and social science graduates are employed. 92 per cent are employed in jobs they are satisfied with and are earning an average median salary almost double what they were earning two years out.

At a recent gathering of Canadian ‍university presidents, the former adviser to the World Bank on postsecondary education, Jamil Salmi, described the skills needed today for work globally. They were effective oral and written communication skills, the capacity for critical thinking and analytical reasoning, the ability to analyze and solve complex problems and the understanding to connect choices to ethical decisions. Employers increasingly want employees with global understanding and cultural sophistication.

Like the 17,000 STU graduates who have gone before you, you will find your way to an exciting and fulfilling future.

For more than a hundred years, St. Thomas has educated leaders in every field of endeavour. STU graduates include authors, premiers, government ministers, a prime minister, actors, journalists, teachers, social workers, lawyers, judges, business leaders, First Nations leaders, and leaders in a host of other fields.

So as you leave our small community, be bold, be courageous, take risks. Grab opportunities when they come your way – they will lead you to a future better than you ever imagined.

And remember how blessed we are in this society to have the opportunity for a world-class ‍university education, so remember to keep giving back to your communities.