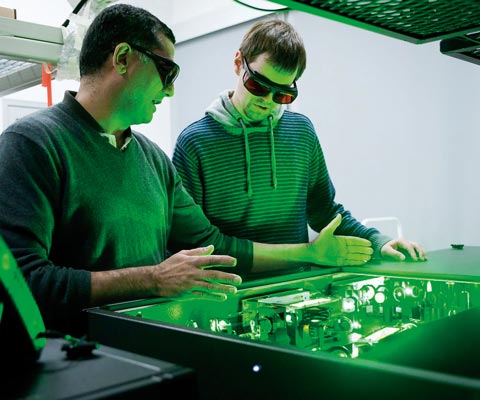 Canada suffers from an innovation gap that puts our national economy at a competitive disadvantage. While there are structural obstacles in the marketplace that are difficult to overcome, there is a huge opportunity for Ottawa to drive an innovation agenda by developing and leveraging the strengths of Canada’s globally competitive universities. Universities, however, must also be prepared to rethink their policies and revise their practices to maximize their innovative potential, writes the President of Simon Fraser University.

“One can only overcome weakness by developing strengths.”

These are the words of Peter Drucker, the management consultant, educator and author, whose well-earned fame was based on his ability to convert complex organizational lessons into actionable advice. And his wisdom is particularly applicable to a problem currently plaguing the Canadian economy.

Canada has an innovation gap that is compromising national productivity and constraining our competitiveness. That gap is the product of structural weaknesses in the marketplace that have hampered private sector research and development. At the same time, we possess a significant strength—a university system with huge research capacity and innovative potential. For a new government committed to pursuing an ambitious innovation agenda, this system provides a promising foundation upon which to build.

Addressing these points in turn, there can be no question that Canada has been falling behind in the innovation race. The World Economic Forum ranks Canada’s innovation performance 22nd in the world, down from 12th in 2009. Ours is the only country in the Organization for Economic Cooperation and Development (OECD) that spends more to acquire other people’s technology than the world buys from us.

The result is a corresponding drag on productivity, especially compared to our nearest and most important trading partner. Since 2000, Canada’s labour productivity growth has been one-third that of the United States—a gap that has had an inevitable, negative impact on our economic competiveness.

A major cause of this underperformance has been our lack of investment in research and development. Canada’s total R&D investment currently sits 12th compared to others in the OECD. This deficiency can be ascribed to certain structural obstacles in the Canadian marketplace. Many of Canada’s largest firms are branch plants of companies that do most of their R&D elsewhere. And small and medium-sized enterprises frequently lack the internal R&D capacity they require to stay competitive and to grow.

These are embedded barriers that defy easy policy prescriptions. So Drucker would wisely advise that, rather than trying to correct these weaknesses, we seek to bolster our strengths. Here, the university sector provides a powerful policy lever. While Canada’s private sector research performance is lacking, our universities are recognized as research powerhouses. We have 23 universities listed among the best 500 in the world—a remarkable showing for a country with less than half a percent of the world’s population.

It is true that between 2006 and 2014 Canada fell from third to seventh place among OECD countries for its HERD intensity (the percentage of gross domestic product spend on Higher Education Research and Development). However, the last federal budget injected $95 million in new funding to the three federal granting councils—an important first step in reversing this trend and restoring Canada’s standing in this key indicator.

Here, then, is the basis for a policy solution—a clear opportunity to overcome weakness by developing strengths. The federal government has already made some important moves in this direction. It has begun to restore Canada’s support for higher education research funding and has committed significant funds to a proposed innovation agenda. It is vital that this process continue—and that government takes full advantage of universities’ extraordinary research strengths and innovative potential in pursuing that agenda.

But the challenge is not government’s alone. If universities are to drive Canada’s innovation agenda, we too must heed Drucker’s call to overcome weakness by developing strengths.

First, universities need to increase opportunities for researchers to engage with industry and civil society to inform their research activities, and to increase the chances of their discoveries and innovations succeeding in the marketplace. This is not as obvious as it might seem. The traditional model of university knowledge mobilization involves researchers making discoveries and developing ideas in isolation from the community, and then trying to push them out into an untested and unfamiliar marketplace. Not surprisingly, relatively few survive the journey. Indeed, the gap between university research and the marketplace is so pervasive and so well known that it has its own name—the ‘valley of death.’

Against this paradigm, Simon Fraser University (SFU) has enjoyed success by enabling researchers to connect with industry and the community early in the process to enable their research to be pulled to known market needs and opportunities. Our 4D Labs, for example, is a state-of-the-art materials science and engineering facility that undertakes research in response to information received from industry partners. Another model, Innovation Boulevard, is a community-based venture led by SFU and the City of Surrey that brings university researchers together with health care providers and industry partners to develop new medical technologies.

A second goal for universities should be to equip their students with practical knowledge and skills, and with entrepreneurial abilities. One way to do this is to expand cooperative education. This is already an area of success; more than 80 Canadian post-secondary institutions send over 80,000 students a year to co-op placements, where they learn hands-on skills and find practical applications for their theoretical training. The University of Waterloo has one of the largest co-op programs in the world, and other schools such as the University of Victoria and SFU are working hard to close the gap.

Universities must also do more to provide entrepreneurship training opportunities to students in all disciplines. Marketable discoveries and ideas arise across the university, not just in business schools. It is therefore important for all students to have access to programs that help them gain the knowledge and support they need to bring those discoveries and ideas to the marketplace. To this end, SFU recently initiated an undergraduate certificate program in entrepreneurship that is available to students across the university, as well as a certificate program targeted at graduate students in science and engineering.

A third strategy for harnessing innovative capacity is creating university-based incubation and acceleration programs and networks that provide faculty, students and community partners the support they need to launch successful business ventures.

Many universities have created business incubators specifically designed to support student entrepreneurs. SFU’s Venture Connection was the first in Western Canada, and is available to students from across the university.

Innovation is not just about generating profit. It’s also about producing value for people and for society. So, universities need to foster programs that nurture social innovation. An SFU example is RADIUS (RADical Ideas Useful to Society), a social innovation lab and venture incubator that is open to all SFU students, as well as to others. Since it was established in 2013, RADIUS has supported more than 80 ventures and fostered numerous programs, the newest of which is the RBC First Peoples Enterprise Accelerator.

There are two major challenges to be addressed if Ottawa is to succeed in advancing its innovation agenda—one for government and one for universities. Recalling Drucker’s advice, the course for government seems clear: the best way to overcome weaknesses in Canada’s marketplace that inhibit private sector R&D is for Ottawa to develop and leverage the research strengths and innovative potential of this country’s universities. And for universities, the path is no less obvious: even as we look to government to invest in universities as a means of building an innovation economy, we must be prepared to rethink our policies and revise our practices to maximize the value of that investment.