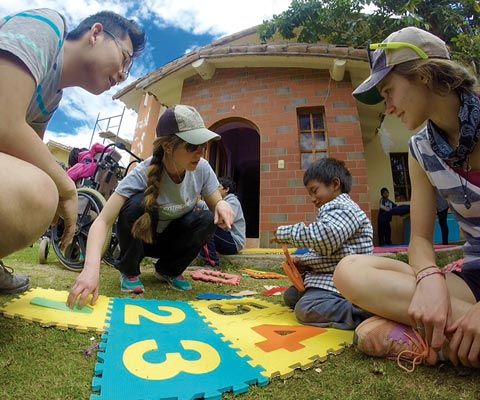 Despite universities’ increased efforts to provide students with a wider range of opportunities to travel and experience other parts of the world while completing their post-secondary studies, the vast majority of today’s undergraduates choose to stay home. For their own sake and Canada’s future prosperity, this needs to change, writes the president of Western University.

Six months into their mandate following October’s federal election, the Liberal government has sent some encouraging signals that it understands the potential for international education to become a more significant driver of economic development and prosperity in Canada.

Among these positive signs was February’s roll-out of the new “EduCanada” brand designed to market Canadian postsecondary institutions abroad. Featuring the bilingual tagline “A world of possibilities/Un monde de possibilités,” the new packaging positions Canada as a preferred destination for international students choosing where to pursue their studies in the global education marketplace.

Then in March, Immigration Minister John McCallum announced his intention to reform the Express Entry program—a computerized system that matches employers with foreign skilled workers, yet has rejected thousands of graduating international students already in Canada because the program favours prospective workers seeking to enter the country from abroad.

“International students have been shortchanged by the Express Entry system,” said  McCallum, adding that newly minted graduates “are the cream of the crop in terms of potential future Canadians” and represent “the most fertile source of new immigrants for Canada.”

And in April, International Trade Minister Chrystia Freeland, in a speech to the Canada-China Business Council, was reported to suggest that government and business cooperate to sponsor 100,000 Canadian students to study abroad in China.

“Those human connections are essential to build a real and robust and lasting relationship,” said Freeland, referencing a similar campaign in the US promoted by President Barack Obama, called “100 Thousand Strong,” that also aims to strengthen bilateral relations through student exchange.

Freeland’s decidedly ambitious proposition particularly caught my attention because it relates closely to one of the key recommendations made in a report I helped prepare in 2012 as Chair of the federal government’s Advisory Panel on Canada’s International Education Strategy.

In that report, our panel argued that for Canada to realize its competitive aspirations in the global economy and international education marketplace, the federal government should co-fund—together with academic institutions and/or provincial/territorial governments—a major student mobility program. The idea is to create opportunities for 50,000 Canadian students per year to travel abroad for study, cultural exchanges, community-service and/or other experiential learning activities by 2022.

Our panel suggested that a federal investment could be matched by institutions and/or provincial and territorial governments and private donors by a 2:1 ratio, and that such an initiative would be an important complement to other institutional programs providing similar opportunities for faculty exchanges and research partnerships with foreign institutions.

I welcome Freeland’s ambitious suggestion of 100,000 students pursuing study abroad. However, what’s more important to consider is the philosophy behind the idea, along with the merits of pursuing such a policy more aggressively to better support the development of our future global citizens.

In its 2014 survey of Canadian universities and their progress toward internationalization, Universities Canada highlighted the strengths, benefits and shortcomings of student mobility programs.

The survey’s report describes student mobility as “one of the most high-profile policy issues in both Canadian and global discussions of internationalization in higher education. The twin imperatives of raising students’ awareness as global citizens and of preparing future workers for a globalized labour market and cross-cultural competencies are increasingly seen as vital reasons for promoting international experience for Canadian students, both abroad and on campus.”

Yet, despite the fact that 97 per cent of Canadian universities offer their students an ever-increasing range of learning opportunities abroad, the survey reveals that only 3.1 per cent of full-time undergraduate students (approximately 25,000) participated in such programs during the 2012-13 academic year—a disappointingly low number that has been static for years. In this regard, Canadian students trail their European and Australian counterparts, who are more inclined to travel as part of their formal postsecondary education.

When asked what they consider the most important barriers preventing students from traveling abroad as part of their educational experience, universities most often point to lack of funds or financial support—factors cited by 54 per cent as the top reason and by 91 per cent among the top three reasons. Almost half (49 per cent) listed “inflexible curricula” or “too-heavy programs” as other reasons keeping students at home, followed by students’ lack of interest or recognition of benefits (39 per cent).

At my own institution, Western University, we’ve been working hard to increase the
number of international learning opportunities for our students, while at the same time removing institutional barriers that may discourage students from studying abroad. While we have made some headway in raising the quantity, quality, profile and benefits of these opportunities, we continue to face challenges in encouraging their uptake.

During the 2014-15 academic year, for example, approximately 1,700 Western University students (undergraduate, masters and doctoral) participated in some kind of international learning experience. This represents less than 6 per cent of our total full-time student enrolment (28,900).

Among our longest-established and most successful international learning initiatives is the Alternative Spring Break, which enables students to participate in community-service projects with organizations located regionally, nationally and globally. Since the program began in 2002-03, close to 2,000 students have traveled across Ontario, Canada, the US and to countries in the Caribbean Islands, Central and South America, returning from their experiences with an increased sense of civic engagement, intercultural awareness and competency. Students are required to fund their own participation in this popular program, though there are some donor-sponsored award and bursary programs that help offset costs for qualified students.

Western’s latest initiative on this front is the International Learning Award—or “Boarding Pass”—which provides $1,000 to all full-time, second-year students who maintain an 80 per cent grade average and choose to participate in a university-sanctioned international learning experience in their third year. Similar to offers made by other universities, Western’s new Boarding Pass was included this year for the first time as a recruitment incentive in our admission offer packages. Given the high quality of students who study at Western (our students’ average entering grade is the highest among Ontario universities) we anticipate up to 40 per cent of our incoming class (5,200) will qualify for the award.

Of course, $1,000 does not cover the full cost of most international learning opportunities, but it does send a message to students that gaining such experience is important and that it has value. I’ve made it my goal to create greater awareness of these programs on my campus and to encourage faculty to take their students abroad, whether for short-term trips or fieldwork, which also receives additional funding at Western.

For students and parents already grappling with the cost (and for many, associated debt) of financing their university education, an understandable question to ask is what is the pay-back for such an investment of money and time?

As reported by Tim Johnson in a recent article published in University Affairs, there are several studies that help answer this question. For example, in a study conducted by the Canadian Bureau for International Education, 90 per cent of graduates who participated in such programs say the experience has contributed to their career achievements. Another CBIE survey estimates that 80 per cent of Canadian hiring managers view cross-cultural understanding and knowledge of a global marketplace in their employees as competitive assets for their companies. And looking beyond our national borders, Johnson reports that alumni of the European Union’s Erasmus student mobility program have an unemployment rate 23 per cent lower than their peers five years after graduation.

So while its immediate financial cost, time and other obstacles may discourage studying abroad, its longer-term benefits—for individuals and society as a whole—offer compelling reasons to overcome these barriers.

From my personal perspective as a Bangladeshi immigrant who has studied and worked in multiple countries and five Canadian provinces over the past 30 years, the intrinsic value of developing a broad world view through international education is self-evident. But the imperative to better prepare young Canadians for life in the global economy should make crystal clear for all the need for programs that promote and support opportunities for students to make the world their classroom.