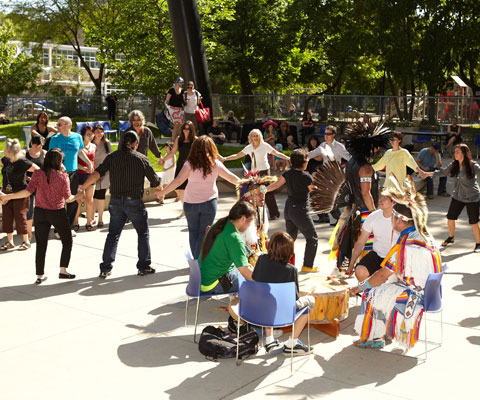 University of Victoria to host in 2018

WINNIPEG – Higher education and Indigenous leaders from across the country reinforced their commitment to action on reconciliation through higher education as the third annual National Building Reconciliation Forum, hosted by the University of Manitoba, wrapped up yesterday in Winnipeg.

“I congratulate the organizers on a successful forum this year,” said Pari Johnston, vice president of policy and public affairs at Universities Canada, who attended the event. “It’s exciting to see the momentum around reconciliation in Canada with universities taking a leading role. This annual forum is an important opportunity for university and Indigenous leaders to share best practices as our members take action on the commitments they’ve made to this critical national effort. ”

At the closing ceremony of the forum, it was announced that the University of Victoria has been selected to host the 2018 forum which will focus on Indigenous language revitalization and economic growth of Indigenous communities.  Just over half of Canadian universities offer Indigenous language courses, and since 2015, there has been a 57 per cent increase in courses taught in which the language of instruction is an Indigenous language.

Spurred by the 2015 Report of the Truth and Reconciliation Commission of Canada, the annual forum brings together leaders from universities, colleges and Indigenous communities to create meaningful and lasting institutional change in the higher education sector to advance reconciliation. Working with the local host institution, Universities Canada plays a national coordinating role in the annual events to ensure momentum and follow up.

Building on surveys in 2013 and 2015, a new 2017 Universities Canada member survey shows that universities across the country are prioritizing reconciliation efforts.