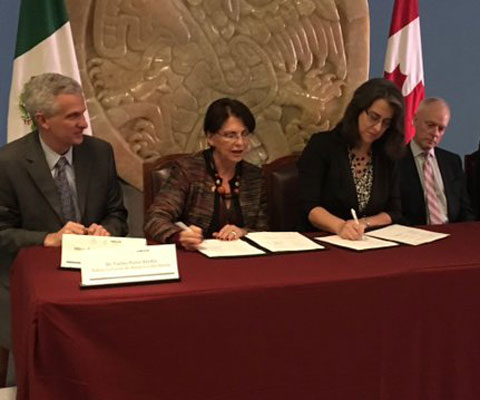 Mexico City, Mexico – Canada strengthened its higher education ties with Mexico today as Universities Canada signed a memorandum of understanding with the National Council of Science and Technology of the United Mexican States (CONACYT).

The agreement will increase academic exchanges and research collaboration between the two countries, allow more Canadian graduate (master’s and PhD) students to study in Mexico, and attract Mexican graduate students to Canada.

“Today’s announcement builds on increasing momentum between Canadian and Mexican universities,” said Paul Davidson, president of Universities Canada. “It puts a spotlight on the opportunities for collaboration in terms of student mobility, research and innovation.”

CONACYT grants scholarships to international students for graduate studies in Mexico, and for Mexican nationals to pursue graduate studies in foreign countries. Through this MOU, Universities Canada’s 97 member institutions will be eligible to enter into agreements with CONACYT to host Mexican master’s and PhD students on their campuses and send their own students to Mexico. The agreement also supports two-way postdoctoral fellowships and faculty exchange.

Today’s agreement was signed during the Canada-Mexico Partnership meetings and builds upon Canadian universities’ longstanding relationship with Mexico. In September 2014, during a visit to Mexico by a delegation of Canadian university leaders, Universities Canada renewed a five-year memorandum of understanding with its Mexican counterpart organization, the National Association of Universities and Institutions (ANUIES).

Mexico is a priority country in Canada’s International Education Strategy and Global Markets Action Plan. The agreement between Universities Canada and CONACYT strengthens the two countries’ trade relations and contributes to mutual competitiveness and economic prosperity.

CONACYT is an autonomous federal government agency that promotes and finances scientific and technological research as well as student mobility at the post-graduate level. Its mission is to develop the scientific knowledge of Mexico’s higher education institutions.

← Previous
Universities’ Role in Knowledge Transfer
Next →
Universities, an investment in our future