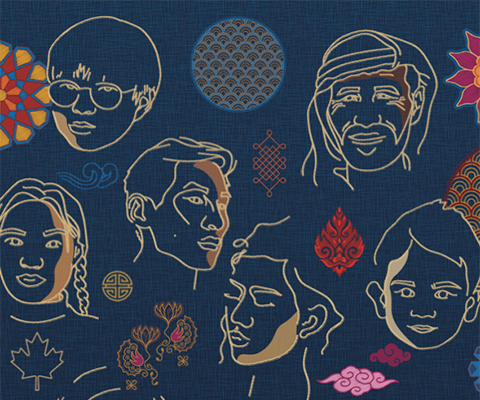 This Asian Heritage Month, join us in celebrating Asian cultures, histories and outstanding achievements by Canadians of Asian heritage.

The 26th Governor General of Canada (1999-2005). Madame Clarkson’s tenure was remarkable for her passionate interest in Canada’s North, which led her to establish the Governor General’s Northern Medal, awarded annually to an individual who has contributed outstandingly to our understanding and development of the North. Her interest in Indigenous peoples helped bring awareness to the forefront of national discussion.

She obtained both an Honours B.A. and her M.A in English Literature from the University of Toronto’s Trinity College.

Before becoming the first Canadian of Asian origin appointed to the Senate of Canada, Senator Vivienne Poy was renowned as a fashion designer and entrepreneur. She founded her label, Vivienne Poy Mode, in 1981. Poy studied in Hong Kong and England and moved to Canada in 1959, where she earned a PhD in history from the University of Toronto.

David Suzuki was a professor in the genetics Department at The University of British Columbia from 1963 until he retired in 2001. Suzuki has received numerous honours and awards, including Officer of the Order of Canada in 1977 (later elevated to Companion of the Order of Canada in 2006); the United Nations Educational, Scientific and Cultural Organization (UNESCO) Kalinga Prize for science writing in 1986; and a lifetime achievement award from The University of British Columbia in 2000. He is also the recipient of 24 honorary degrees from universities in Canada, the United States, and Australia. In 2009, Suzuki won the Right Livelihood Award, known as the “Alternative Nobel Prize,” which recognizes outstanding vision and work for the planet and its people.

One of the most decorated women’s hockey players in Canadian history, Sunohara has translated her success behind the bench. Sunohara was named the U SPORTS FOX 40 coach of the year for the second time in her career as head coach of the University of Toronto Varsity Blues women’s hockey team, her alma mater. In 2020, the Japanese Canadian Cultural Centre named Sunohara a recipient of the Sakura Award, which recognizes exceptional contributions made by individuals to the promotion and exchange of Japanese culture and enhancing awareness of Japanese heritage within Canada and abroad.

A Chinese-Canadian actor, Liu won a Game Changer Award and People’s Choice Award for his role as Shang-Chi in the Marvel movie Shang-Chi and the Legend of the Ten Rings (2021). Before his leading role in the Marvel movie, he played Jung Kim on the CBC sitcom Kim’s Convenience. He is also a writer and producer. Liu had initially worked as an accountant, but quickly discovered he had other passions and pursued a career as an extra and stuntman in television and movies.

Born in British Columbia in 1923, Lyons and her family left in 1942 after the expulsion of Canadians of Japanese heritage from the area. The family settled in Winnipeg and later moved to Hamilton, where she attended McMaster University and obtained an economics degree.

Lyons started as a typist with the BBC and became a producer for BBC’s Asian current affairs service. In 1957, Lyons interviewed Lester Pearson after he received the Nobel Peace Prize, and he encouraged her to enter the Canadian journalism industry. She moved to Toronto and worked at CBC Radio as a public affairs producer. Lyons was promoted to director of the AM radio service and then to vice-president of network radio at the CBC, becoming the first woman elected to that position.

In 1996, McMaster University awarded Lyons an honorary Doctorate of Letters. The Lyons New Media Center at McMaster was named in her honor.

Born in Colombo, Sri Lanka, Shyam Selvadurai moved to Toronto following the race riots of 1983. He has a B.F.A. in theatre directing and playwriting from York University, and an MFA in creative writing from The University of British Columbia. Selvadurai worked as a scriptwriter for television before focusing on writing short stories, novels, and essays. Funny Boy was a best seller in Canada. Selvadurai’s short story “The Demoness Kali” that was first published in the August 2006 issue of Toronto Life won the Gold Prize in the Fiction Category of the 30th National Magazine Awards.

His new novel Mansion of the Moon, a historical novel about the Buddha’s wife, was released by Knopf in May 2022.