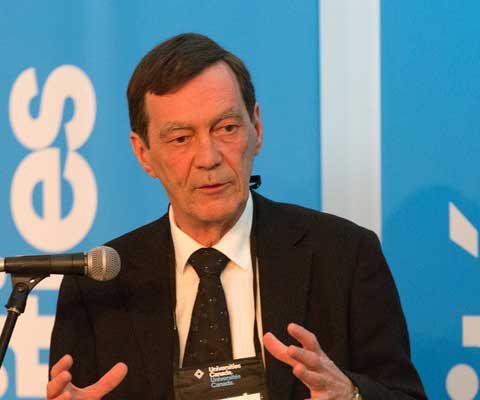 By Robert Proulx, rector of Université du Québec à Montréal (UQAM) and a member of Universities Canada’s board of directors

It is often said that the devil is in the details. With the 2017 federal budget, it is just the opposite.

Indeed, at first glance the 2017 budget appears tight-fisted toward universities. While last year saw a record increase in funding for research granting councils, the situation is much different this year. Despite the concerns expressed by researchers and the strong need for more support for fundamental research, the annual budgets of the three federal councils (NSERC, SSHRC, CIHR) remain unchanged.

The Canadian Foundation for Innovation (CFI) finds itself in a similar position. Although funding received in 2015 will allow the organization to maintain its activities until 2018, investment in research infrastructure is critical if Canadian universities are to continue to innovate and achieve scientific excellence.

The academic community’s legitimate demand for a substantial government commitment to research funding may yet be answered in the final report of the Fundamental Science Review, which will be available soon. Eagerly awaited by universities and researchers, the report and its recommendations should, hopefully, allow the government to better plan its strategic reinvestment in fundamental research for all areas of scientific inquiry.

While the 2017 budget may not meet all expectations, a closer look reveals a few measures that take into account the concerns of universities. For example, a strong emphasis is placed on initiatives aimed at lifelong learning, an integral part of the mission of universities. It should be noted that every year more than 400,000 people enroll in continuing education programs at Canadian universities.

With regard to skill development, the Canada Student Loans and Grants program reform initiative, which requires provincial cooperation, is a welcome move. More flexible rules allow part-time students, students with dependents, and returning adults to take full advantage of the program. With this change the government will broaden access to knowledge and improve career opportunities for Canadians.

Experiential learning brings added value to education, and the valuable practical experience gained by students is more important than ever before. Funding of $221 million over five years will allow Mitacs to provide 10,000 work-integrated learning placements for graduate students and postdocs each year, giving a major boost to workforce replacement.

Funding to the tune of $90 million dollars over two years for the Post-Secondary Student Support Program is further cause for celebration. This will allow more than 4,600 Indigenous students to access higher education. Also praiseworthy is the new investment of $5 million over five years for Indspire. This Indigenous-led charity provides bursaries and scholarships to young Inuits, Métis and First Nations students to encourage them to pursue postsecondary education.

The investments will surely be used by universities to create valuable initiatives. A case in point: UQAM recently announced the creation of an Indigenous Reconciliation Task Force mandated to implement and follow-up on measures to facilitate the admission, reception, integration and success of Indigenous students.

Projects aimed at meeting specific educational needs are also in the works, including credited summer school classes. This initiative, in partnership with the Quebec Native Women’s Association, will seek to help women leaders from urban and remote communities acquire knowledge and governance skills.

All things considered, the 2017 budget is sending positive signals to higher education institutions. The commitment to appoint a Chief Science Advisor–an office that already exists in Quebec with a proven track record–could be a sign that research will be given special attention. Nonetheless, there is still a lot of ground to cover. The government must demonstrate that it has heard the concerns of universities.

The time has come to ensure the sustainability of the financing structure for fundamental research. In addition to supporting all Canadian researchers, reinvestment in research would help create the conditions needed to attract leading foreign researchers affected by the current climate of uncertainty in the United States and Europe. It is an ideal opportunity to send a clear message that higher education, research and innovation are an inseparable part of any strategy that seeks to help Canada meet current and future challenges, be they social, economic, cultural or environmental.

← Previous
Budget and beyond: Science report promises roadmap to better research
Next →
Seize the chance to attract foreign university researchers