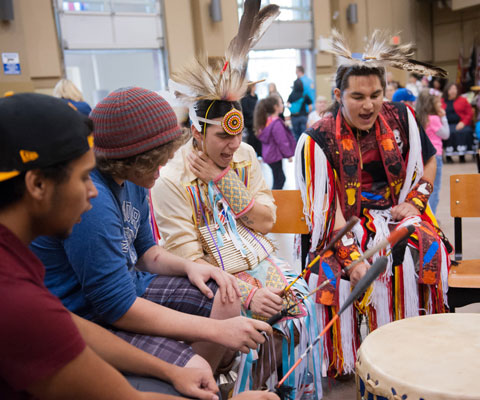 OTTAWA – On National Aboriginal Day, a new survey of Canada’s universities shows the breadth of initiatives being undertaken to advance reconciliation between Indigenous and non-Indigenous people, both on and off-campus.  Results of the recent Universities Canada survey of its members show that well over two-thirds are working to include Indigenous representation within their governance or leadership structures to ensure Indigenous voices are included in decision-making in a meaningful way. As well, close to 80 per cent have undertaken important commemorative or symbolic gestures to acknowledge Indigenous peoples, Indian Residential schools or reconciliation.

“We know there is much more to be done,” says Paul Davidson, president of Universities Canada. “But we are encouraged by the increasing priority universities are placing on reconciliation through education, and how these efforts are touching all aspects of higher education and research.”

The 2015 Report of the Truth and Reconciliation Commission of Canada called for postsecondary institutions to integrate Indigenous knowledge and teaching practices into the academy. Canada’s universities are taking action to integrate these recommendations and implement Universities Canada’s 2015 Principles on Indigenous Education. Other survey findings include: