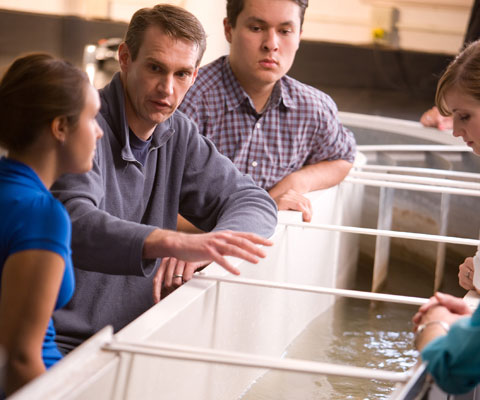 There’s a re-set happening in Canada. Despite the oil slump and struggling loonie, a new federal government in Ottawa has spurred some fresh thinking about the future of Canada. Optimistic, hopeful thinking. That combination of harsh reality and hopeful thinking requires us to be both ambitious and manage our expectations as we look for ways to restore Canada’s place in the global knowledge economy.

The new government is playing the long game. They have to. They have big plans that won’t be achieved overnight. As the government deals with growing economic problems, it needs long-term vision, hard work and investment at the right moment to build that brighter future.

It’s noteworthy that the prime minister has visited a number of university campuses already, where he has made major commitments to water and stem cell research. And Finance Minister Bill Morneau also visited several campuses during his pre-Budget consultations, putting him in contact with the innovative and exciting work that’s happening at Canadian universities.

These are good signs that this government understands the life-changing power of research to solve some of the country’s – and the world’s – most pressing issues.

Infrastructure investment is coming. The Liberal platform committed to significant spending on public transit, social infrastructure and green infrastructure — and it looks like these investments are coming sooner rather than later. This short-term solution to the struggling Canadian economy is integral to building a more prosperous country over the long-term.

Universities have an important role to play. Think back to 2009. A global recession hit suddenly and the government needed to take fast action. One of the most effective stimulus projects was to create a new purpose-built program to advance Canada’s knowledge infrastructure.

Universities demonstrated that they could deliver strategic infrastructure quickly – infrastructure that provided a much-needed economic boost, and that also contributed to long-term research capacity in Canada. In fact, it was just six weeks from first conversation to announcement, and projects were initiated on campuses across the country within six months.

Today universities have deferred maintenance projects worth over $8.4 billion. If called upon, our shovel-ready projects will help get the economy going and strengthen higher education, research and innovation capacity now and for future generations.

Some of these projects will be investments to drive innovation: the facilities and resources that support ground-breaking research and new technologies. Innovation, both in terms of technological advances and social solutions, contributes to vibrant communities, healthy citizens and public systems that work.

From its first days, the government has shown that it understands the importance of innovation. The creation of the new department of Innovation, Science and Economic Development underscores that it is through innovation that we will achieve a more prosperous Canada.

The platform commitment of $200 million per year over three years for a new Innovation Agenda that will increase support for incubators and accelerators is welcome, as is the additional $100 million per year promised to the Industrial Research Assistance Program. And the commitment to create more co-ops and internships is another important example of unlocking young talent and connecting it to our new economy. These can be done quickly to build momentum.

The commitment to create a new Chief Science Officer and the appointment of a scientist as science minister signal that science matters. The parlour speculation about who might be named Science Officer can wait until there has been careful consideration of the role and mandate of the position, and how it fits into the existing research and innovation architecture.

These early signs are very encouraging, but perhaps the biggest challenge on the horizon is to ensure Canada’s research enterprise is resourced at globally competitive levels. The previous government protected investments in research in the face of economic and fiscal constraint. But, taking inflation into account, total funding for the research granting councils decreased by 7% since 2007.

And the fact remains that from 2006 to 2013, Canada fell from third to eighth place in the OECD for HERD intensity (percentage of GDP spent on higher education R&D). Our international peers are increasing their support for higher education research, and Canada is not keeping pace.

That’s why the government needs to commit to increased and untargeted support for the base budgets of the three granting councils — CIHR, NSERC, and SSHRC. Even if other countries were to stand still, it would require an investment of $3.5 billion for Canada to return to third place in HERD intensity. This is where playing the long game really matters.

Major investments in research made in the late 1990s and early 2000s are now bearing fruit. When it comes to international research awards, Canada does well. The Science, Technology and Innovation Council has noted that Canadian researchers win about one in five major international prizes.

As the prime minister said in his speech at the World Economic Forum, Canada is home to diverse, brilliant, entrepreneurial people. Canada’s future lies in its resourcefulness, not just its resources. And if we invest in individuals, institutions, and ideas, we’ll reap the benefits of social and economic prosperity.

Universities Canada will be bringing this message to Washington in February at the annual meeting of the American Association for the Advancement of Science, and we’ll be bringing it to Parliament Hill on February 24, when we host a reception showcasing the extraordinary accomplishments of some of our best Canadian researchers.

Sure, the long game is not an exciting story right now, but it’s our roadmap for a better future. If we invest now in a more dynamic research and innovation ecosystem, and the modern infrastructure that supports it, we can get Canada back to a prominent place in the global knowledge economy – and enjoy the prosperity that goes with it.

← Previous
Liberal arts degrees are a good investment
Next →
Universities and colleges: teaming up for student success