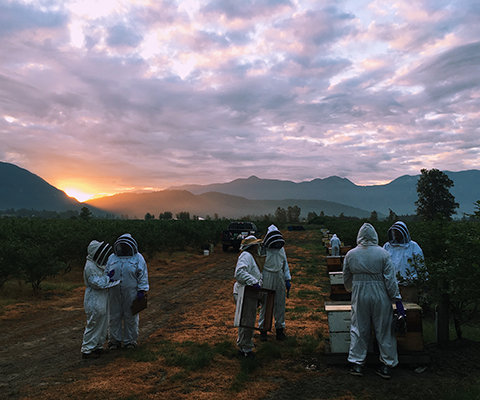 Dr. Alison McAfee, a Postdoctoral Fellow at the University of British Columbia, was named one of this year’s winners of the L’Oréal-UNESCO Women in Science Award for her cutting-edge research on honeybees.

Dr. McAfee’s research focuses on the reproductive health of queen honeybees, who carry the responsibility of reproducing to maintain a strong bee colony.

Interestingly, queen honeybees only mate during one period early in their life. They then store the sperm for years in a special organ called a ‘spermatheca.’

Queen honeybees can live up to five years and typically mother hundreds of thousands of worker and other bees during that time. Lately, however, reproduction rates have been slowing down after only 6-12 months of a queen bee’s life—greatly impacting the health of the colony, who play an important part in pollinating crops.

Dr. McAfee’s research shows that issues with queen bees’ sperm storage are in part to blame. Environmental stressors, such as pesticide exposure and extreme temperatures, may be impacting the storage system.

With the research funding awarded by L’Oréal-UNESCO, Dr. McAfee plans to develop a tool to help her diagnose problems in failing queen bees, as well as understand how they keep sperm alive for so long in the first place.

Her findings could help keep bee colonies healthy, support the beekeeping industry and help us better understand reproduction in honeybees and other animals.