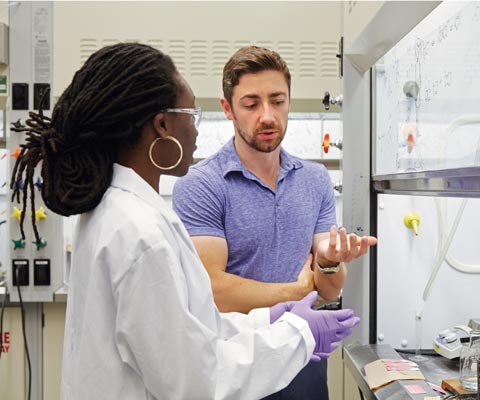 To Canada’s university presidents, innovation is neither an abstract concept nor just a talismanic political keyword. Every day in the research labs of Canada’s universities, knowledge is translated into the quantifiable, practical inventions that feed Canadian innovation and enhance our global competitiveness. Universities Canada President Paul Davidson has harnessed that experience to inform his recommendations for Canada’s Innovation Agenda.

As the countdown begins to Canada’s sesquicentennial, the government is championing an ambitious vision of an innovative, inclusive and prosperous Canada for the next 50 years.

Is it an achievable vision? Yes. But it will require a move from the transitional to the transformational in policy decisions.

Canada’s universities have confidence in the promise of innovation because we know our country has the talent. The challenge before us is to do a better job of unlocking and mobilizing that talent.

That requires cooperation and collaboration among our educational institutions, government and business sectors. And it requires a solid plan of action that we don’t have yet. The federal government reviews now underway in fundamental science, innovation and economic development, however, help create the agenda we need. I believe that agenda should include three fundamental steps.

First, we need to nurture our next generation of leaders and innovators, ensuring Canada has an educated workforce with the skills necessary to succeed in and contribute to the global economy. That means giving all students access to experiential learning and global study.

Students need access to 21st century learning experiences that let them learn in the workplace. The Business and Higher Education Roundtable has called for access to work-integrated learning opportunities for 100 per cent of Canadian students. It’s an ambitious goal, but imagine how our young people – and our country – will benefit.

In a speech to university presidents last May, Dave McKay, CEO of Royal Bank of Canada (RBC), noted one of the crucial aspects of co-ops and internships that we don’t always talk about: they democratize access to jobs. He argued that for minority groups who don’t have social influence or established networks, these experiences level the playing field and give students a boost when it comes to job opportunities.

Learning across borders is also part of a 21st century education. Young Canadians need to understand other countries and other cultures for Canada to become a global innovation nation. There’s no better way to gain these international competencies than by taking part in a learning experience overseas during university – whether it’s through study abroad programs, field schools, research abroad, or international co-ops and internships.

In a town hall with Mexican President Enrique Peña Nieto ahead of the Three Amigos summit in late June, Prime Minister Justin Trudeau addressed this issue with Canadian and Mexican students. “Young people understand that we’re in a globalized world right now, and the more we can challenge ourselves to understand different realities, different perspectives, different cultures, the more we discover about ourselves and our place in an increasingly complex world,” he said.

But as it stands, only 3 per cent of Canadian university students go abroad to study in any given year, despite 97 per cent of universities offering international experiences. Students have identified cost as a barrier to global study. We need to address this and we need to ingrain a culture of global curiosity in students, faculty and families.

Increasing the international mobility of university students is a crucial step in developing our next generation of leaders and sharpening Canada’s competitive edge.

Second, reconciliation with First Nations is a major priority for Canadian universities, for the federal government, and for Canadians. A little over a year ago, Justice Murray Sinclair, chair of the Truth and Reconciliation Commission, said in an interview that “education is what got us into this mess,” but that education is also “the key to reconciliation.”

I couldn’t agree more. And universities have an important role to play in fostering a renewed relationship between indigenous and non-indigenous people in Canada. A university education is a transformative experience, expanding knowledge, nurturing critical thinking and inspiring new ideas, creativity and innovation.

Canada’s universities are ramping up their efforts to build welcoming and respectful learning environments on campus through academic programs, services, support mechanisms, and spaces specifically designed for indigenous students.

A recent survey by Universities Canada shares heartening evidence of this progress. In only two years, we’ve seen an increase of 33 per cent in the number of undergraduate and graduate programs with a focus on indigenous issues or specifically designed for indigenous students.

And 86 per cent of universities now offer targeted support services, including academic counselling and peer mentorship, to meet the unique needs of indigenous students.

But we must do more and we need our partners in government and business to help. To unlock the untapped potential of indigenous youth, we need greater financial aid to improve access to higher education, and we need support for programs that boost student retention.

Third, we must rethink how we support our top researchers and innovators.

But the fact remains that we are falling behind other nations’ investments in research and development. Between 2006 and 2014, higher education expenditures on research in Canada fell from 3rd to 7th among OECD nations.

Raising our level of ambition for what Canada can be over the next decade means investing in higher education research to bring us back to globally competitive levels. This would enable the Canada Foundation for Innovation to provide facilities and equipment to support advanced research across disciplinary and industrial sectors. It would invest in talent and discovery through expanded support for the Natural Sciences and Engineering Research Council (NSERC), the Social Sciences and Humanities Research Council (SSHRC) and the Canadian Institutes for Health Research (CIHR).

Canadian talent must be equipped to excel across borders through international research collaboration, to find solutions to the challenges facing our country and our world. And our funding mechanisms must better support interdisciplinary research to nurture discovery and innovation at the many intersections of modern society.

Business has an important role to play. We must be mindful that from 2006 to 2013, our global ranking in business expenditures on R&D (BERD) fell from 18th to 26th. It is critical that Canadian business step up and reinvest in R&D and hire more talented graduates from Canada’s universities.

The federal government’s first budget in March showed it understands the value and potential of Canadian universities.

Two billion dollars over three years for the Post-secondary Institutions Strategic Investment Fund was a powerful investment in students and the places people learn. We welcome the recent news of modern labs, new research facilities and green energy projects being funded at universities across Canada.

The budget also marked the highest amount of new annual funding for discovery research in more than a decade, with an additional $95 million per year to the budgets of the research granting councils starting in 2016–17. This is an important move toward returning to globally competitive research funding levels.

New funding for co-op education also demonstrated the value this government places on hands-on learning opportunities for students. And investments in K-12 education for indigenous children and teens lay the groundwork for them to aspire to and succeed in higher education.

But now comes the heavy lifting. This government has a lot of work ahead – and has shown that it is ready to take action to catalyze economic prosperity and social inclusion. This summer’s review of fundamental science, the new Innovation Agenda, and the new Economic Advisory Panel hold great potential for forging a new path forward.

We have to seize this moment. Discovery research, applied research, talent mobilization, innovation and economic growth are indispensably connected. To realize an innovative and prosperous future, we need to make strategic investments in people and ideas – and universities will play a fundamental role in getting the results Canada needs from these investments.

Our universities are not only engines of innovation, they are a proven path to prosperity – for individuals, communities and for our country.