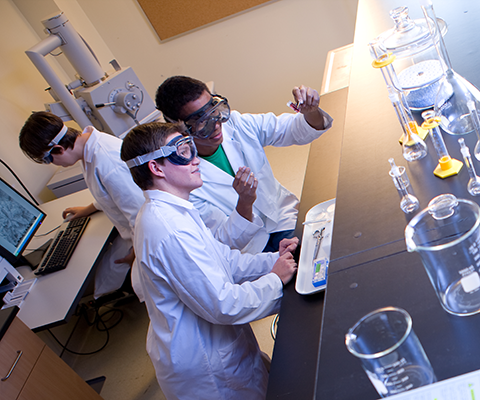 Canadian universities have contributed to global advancements in medicine, food production, computer science and so much more. Learn about some of the greatest all-time discoveries by researchers and graduates.

Insulin: a lifesaving therapy for diabetics – University of Toronto

Before Google, there was Archie—a search engine created by McGill University student, Alan Emtage. Originally invented to help him locate files in public archives of the university as part of his job at its School of Computer Science (the name Archie stands for “archive” without the “v”), he eventually opened up the program to other students and staff so they could search for themselves. Many of the techniques used in Archie are still used in Google, Yahoo! and other search engines today.

Dr. Maxwell House, Newfoundland’s first neurologist, was a telemedicine pioneer, whose work circled the globe. He founded Memorial University’s telemedicine program in the 1970’s to improve health care accessibility in rural and remote communities. Today, the program links 65 locations province-wide and provides more than 1,000 consultations a month. Telehealth has also been an important tool for physicians around the world during the COVID-19 pandemic.

James Gosling graduated with a Bachelor’s degree in computer science from the University of Calgary before going on to develop one of the most commonly used programming languages in the world: Java. Today, every cell phone and financial transaction goes through Java code.

While working at the University of Guelph in the 1960’s, Gary Johnson developed a breed of potatoes now readily available in  grocery aisles: the Yukon Gold potato. Named for its distinctive yellow colour and in honour of the Yukon River “Gold Rush” country, this enhanced potato is recognized for its disease resistance and growing performance in North America.

The pacemaker – University of Toronto

Electrical engineer and University of Manitoba graduate, John Hopps, invented the lifesaving cardiac pacemaker in 1950 at the University of Toronto’s Banting Institute. While exploring hyperthermia’s effects on the heart, Hopps designed the first pacemaker, which uses electrical impulses to stimulate the heart. Pacemakers are now used by millions of people worldwide.

Canola oil—so named to represent “Can” for Canada and “ola” for oil—is a staple cooking oil developed from the rapeseed plant. Researcher Bryan Harvey from the University of Saskatchewan, in collaboration with Agriculture Canada scientists, developed what is known as the “half-seed technique.” This technique allowed scientists to analyze the oil in individual seeds for consumption safety without needing to destroy them and is a practice still in use today.

University of Manitoba researchers Downey and Baldur Stefansson, known as the “fathers of canola,” also contributed by finding a way to remove an anti-nutritional compound, called glucosinolates, from the rapeseed crops. Today, 250,000 people work in careers related to the Canola industry, and it generates about $26.7 billion for Canada.

The world’s first hepatitis B antiviral – University of Alberta

In the 1990’s, University of Alberta researchers Lorne Tyrrell and Morris Robins discovered potent hepatitis B antiviral agents, which led to the development of the world’s first oral antiviral medication (called Lamivudine) to treat hepatitis. The medication is now used in over 200 countries to treat chronic hepatitis B and has slowed or prevented death for millions.

William Chalmers, a McGill University graduate student working in a chemistry lab in the early 1930’s, invented a new method for producing an important but scarce ingredient of plexiglass: methyl methacrylate. His discovery allowed the substance to be produced in large quantities and has been mass commercialized in America and Britain. Originally used to make shatter-proof windshields and aid in wartime efforts, plexiglass is now being used across the globe as a physical barrier to prevent the transmission of COVID-19.