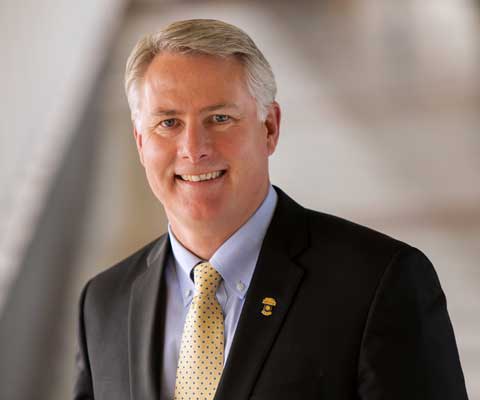 OTTAWA – Mike Mahon, president of the University of Lethbridge, was elected Chair of Universities Canada’s board of directors today during the association’s fall membership meeting in Ottawa.

“I am honoured to have this new opportunity to work with my colleagues across Canada to advance the role of universities in building a better Canada,” said Dr. Mahon.  “Now is Canada’s moment, and I look forward to working with university leaders to build Canada’s reputation as a global leader in research and innovation, prepare our next generation and strengthen Canadian communities.”

Dr. Mahon succeeds outgoing board chair Dr. Elizabeth Cannon, president of the University of Calgary, who held the position since 2015. “We have been very fortunate to have Dr. Cannon lead the university community. She launched our commitments to Canadians, advocated successfully for new research investments and helped position Canada’s universities internationally in this period of global change,” Davidson said.

Dr. Mahon was named the sixth president and vice-chancellor of the University of Lethbridge in 2010 and was reappointed for a second term beginning July 1, 2015. Dr. Mahon’s past roles with Universities Canada include board member and chair of the governance committee.

Dr. Gertler is one of the world’s foremost urban theorists and policy practitioners whose research focuses on the geography of innovative activity and the economies of city-regions. Dr. Shepard has an extensive track record of leadership roles at several prestigious universities, including Ryerson University, the University of Guelph and institutions in both Texas and Virginia. Dr. Trimbee, an aquatic ecologist, comes from a background of public policy where she was a former deputy minister of multiple departments in the Alberta government, including Finance and Treasury Board, Service Alberta and Advanced Education and Technology.