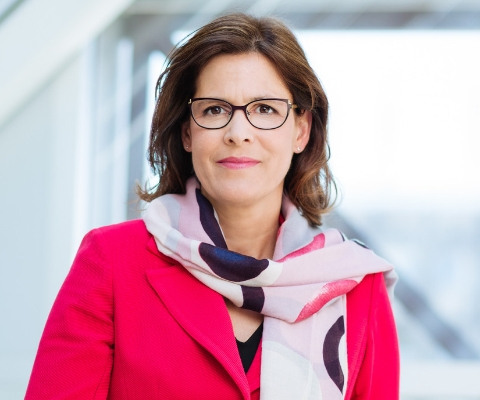 OTTAWA – Dr. Sophie D’Amours, rector of Université Laval, became Chair of Universities Canada’s board of directors today during the association’s fall membership meeting in Ottawa. Dr. D’Amours succeeds outgoing board chair Dr. Mike Mahon, president of the University of Lethbridge, who held the position since October 2017.

“Sophie D’Amours is an outstanding academic leader who is deeply committed to research excellence, advancing reconciliation and community engagement,” said Paul Davidson, president and CEO, Universities Canada. “We are pleased she will bring her expertise and strong leadership to ensuring our universities remain at the forefront of solving the issues that matter most to Canada and Canadians.”

Dr. D’Amours was elected as the first-ever woman rector at Université Laval in 2017, following her post as vice-rector of research and innovation from 2012 to 2015 at the same university.

“Canadian universities have an integral role to play in strengthening Canada’s ability to address global challenges, by empowering our next generation, continuing to strengthen Canada’s formidable research capabilities and building strong partnerships across civil society,” said Sophie D’Amours. “It is my privilege to take on this role and I look forward to working with my fellow university leaders over the next two years.”

Dr. D’Amours has extensive experience in higher education, research and university management, both in Quebec and internationally. An engineer, she has been the Canada Research Chair in Planning Sustainable Forest Value Networks from 2009 to 2017 and has served as board chair of the Centre de recherche industrielle du Québec (Quebec Centre for Industrial Research) since 2010. She also contributes to the boards of the Société québécoise des infrastructures (Quebec Infrastructure Corporation), the Natural Sciences and Engineering Research Council of Canada, the International Development Research Centre and Fulbright Canada, among others.

Dr. Bluechardt is an experienced academic and administrative leader with a deep commitment to inclusion, mentorship and accessible education, and more than 25 years in the post-secondary sector across Canada. Before joining the Mount in July 2017, she was the vice-president (Grenfell Campus), Memorial University of Newfoundland.

Annette Trimbee, The University of Winnipeg