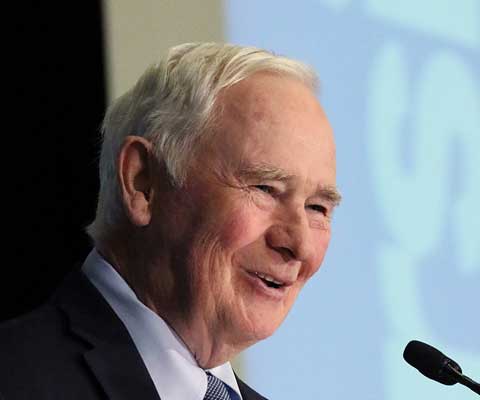 OTTAWA – Following the welcome news today that Julie Payette will serve as Canada’s next Governor General, universities express deep gratitude to His Excellency the Right Honourable David Johnston for his outstanding service to Canada and his role as a global champion for Canadian higher education, research and innovation.

“Throughout his stellar career, David Johnston has been a tireless champion for the people and ideas that make Canada strong,” says Universities Canada Chair, Elizabeth Cannon. “He leaves a tremendous legacy from his work celebrating and promoting a culture of innovation through initiatives like the Governor General’s Innovation Awards, and his efforts to promote reconciliation with Indigenous peoples.”

“There is no doubt that David Johnston is a Canadian visionary,” says Bonnie Mallard, 2017 recipient of a Governor General’s Innovation Award and professor of immunogenetics at the University of Guelph. “He loves this great country and has made a real impact as we strive together as Canadians to continue to build innovation from coast to coast.”

During his term as Governor General, David Johnston was also instrumental in launching the Queen Elizabeth Scholars (QES) program, creating a community of global leaders across the Commonwealth.

“The Governor General changed my life by creating the Queen Elizabeth Scholarship,” says Firas Khalid, recipient of a QES award. “His visionary leadership and determination to allow students from Canada to travel abroad has opened my eyes to new knowledge and allowed me to become a global citizen of this world.”

Canada’s universities enthusiastically welcome the announcement of Julie Payette, a true exemplar of Canadian excellence in science, as the next Governor General of Canada. She holds a bachelor’s degree in electrical engineering from McGill University and a master’s of applied science in computer engineering from the University of Toronto, as well as 18 honorary degrees from Canadian universities. Universities Canada looks forward to working with her in advancing higher education, research and innovation for the benefit of all Canadians.