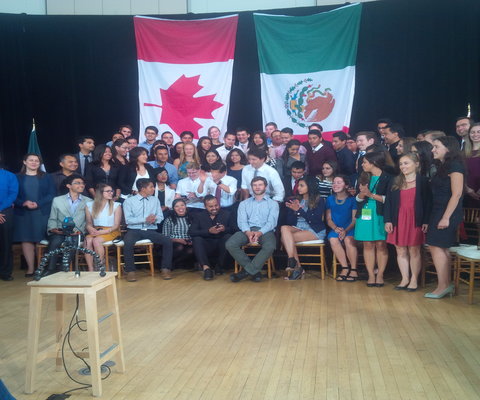 OTTAWA – More Canadian students will soon be able to study in Mexico and Canada’s universities will welcome more Mexican students thanks to a new commitment by the governments of both countries to enhance international exchange opportunities.  Prime Minister Justin Trudeau and Mexican President Enrique Peña Nieto held a town hall in Ottawa today with postsecondary students from each country on the economic, social and career benefits of international study. Following this gathering, the two governments announced their intention to boost opportunities for more students including fostering international work-integrated learning experiences for students from Canada and Mexico.

“Canada needs more graduates with cross-cultural competencies and global understanding,” says Paul Davidson, president of Universities Canada. “This commitment by the Canadian and Mexican  governments  will ensure that more students benefit from international experiences which not only help Canadians succeed in the global knowledge economy, but also contribute to building a more innovative, prosperous and inclusive Canada.”

Canada’s business leaders are increasingly seeking graduates with the 21st century knowledge and skills developed through international experiences. An employers’ survey commissioned by Universities Canada in 2014 revealed that 82 percent of small and medium-sized enterprises that hire recruits with international and intercultural competencies say these employees enhance their company’s competitiveness.  However, only three percent of Canadian undergraduate students participate in a study-abroad experience each year.

Canadian universities have a longstanding relationship with Mexico and there has been increasing momentum to build on those ties. In 2014 as part of a Canadian university mission to Mexico, Universities Canada renewed a five-year memorandum of understanding with its Mexican counterpart organization, the National Association of Universities and Institutions (ANUIES).  And in November 2015 Universities Canada signed a memorandum of understanding with the National Council of Science and Technology of the United Mexican States (CONACYT) to increase opportunities for Canadian and Mexican graduate students to study in each country.  There is growing commitment by several Canadian universities, working in partnership with Mexican institutions, to support the needs of Indigenous peoples in both countries.

Mexico is a priority country in Canada’s International Education Strategy and Global Markets Action Plan.  Canada is recognized in Mexico – and around the world – as an excellent destination for study and research. Mexico is the second-largest Latin American source country for international students in Canada and ranks 10th globally.

← Previous
Letter to the editor: Labour force needs many skills
Next →
Significant growth in university programs and services for Indigenous students