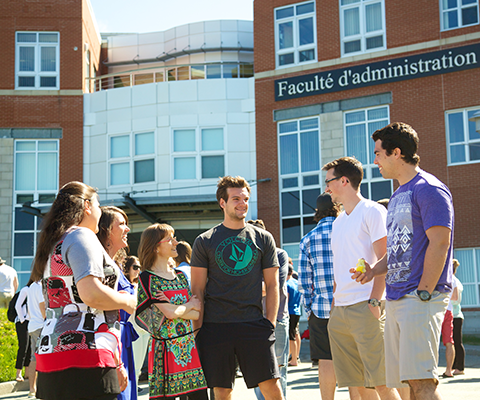 During the Mois de la francophonie, we’re spotlighting some of the universities across Canada promoting French language, cultures and research excellence.

The largest bilingual (English-French) university in the world, francophonie is infused in the University of Ottawa’s programs and campus life. Students have the unique opportunity to pursue a degree in either language or can take advantage of the French Immersion Stream to study in both. Those wishing to deepen their understanding of francophone cultures, laws, language and politics can register for a certificate in the study of Canadian francophonie.

Campus Saint-Jean is a French-language multidisciplinary faculty at Edmonton’s University of Alberta. The campus’ nearly 800 students complete their postsecondary studies in French and can choose from two college programs and nine bachelor’s programs. As the only French-language university-degree program west of Manitoba, Campus Saint-Jean serves Francophone and Francophile communities in Western Canada.

In Canada’s biggest city, students can pursue their degree at York University’s multilingual Glendon Campus. Their bilingual and trilingual programs reflect Canada’s cultural diversity and offer a window to the rest of the world. Programs range from Biology to Economics, and even include a PhD in Études francophones.

Based in Canada’s most bilingual city, the Université de Montréal offers French-language education and globally recognized research. They offer courses on Québécois culture and the French language, and they play a key role in helping non-francophones learn and adopt the French language in their daily life.

The only francophone university in Nova Scotia, the Université Sainte-Anne offers college and university programs, as well as French immersion and customizable French as a second language programs. The university is proud to serve the Acadian and Francophone population in the province, as well as promote francophonie throughout its community.

Founded in 1913, the University of Sudbury has long contributed to the vitality of the Francophone community in Ontario and the North. This bilingual university offers programs and courses in Philosophy, Indigenous Studies, Religious Studies, Folklore and Études journalistiques—all of which are also credited to a Laurentian University degree.

The oldest and the only francophone university in Canada’s Western provinces, the Université de Saint-Boniface has an important role to play in promoting francophonie. Nestled in the francophone neighbourhood of Winnipeg, Manitoba, the institution is comprised of a university and two colleges: l’École technique et professionnelle (ETP) and l’École des sciences infirmières et des études de la santé (ESIES). The university also has a language school which offers French courses for new immigrants, teachers and others in the community.