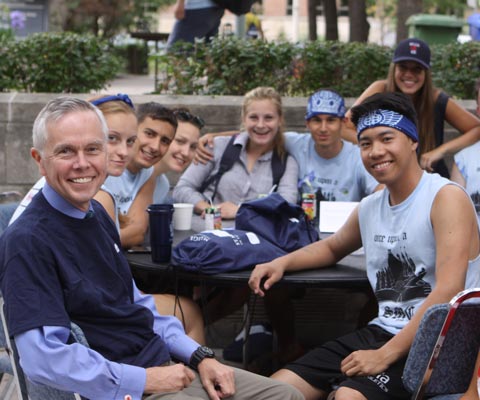 While I look forward to welcoming new students on campus come September, I can’t help but wonder when, and if they’ll leave.  I want them to go away – Not right away, but soon.

They need to know that the world is their classroom, and they need to go abroad to get a full education – one that will prepare them for the future.

What I consider my third year of higher education, from September 1975 to June 1976, was spent travelling around the world. It was a deeply influential experience that neatly separated my first two years at the University of Toronto, in which I was making the transition out of my high-school self, from my last two years as an undergraduate, when I began to grow emotionally and intellectually, developing the skills and inclination to be a life-long learner.

My travels were partly financed from money I made delivering imported Italian delicacies to the corner grocery stores and pizzerias of Sydney, Australia – a stop on the first leg of my travels. I was a beneficiary of one of the earliest versions of the now-familiar working holiday program for student travellers. The program was based on the assumption that international experience could be, as we said then, “broadening.” The idea was to extend your intellectual horizons, becoming aware of the depth, complexity and sheer richness of the world.

Some of what I saw was of great benefit to me years later in a diplomatic career spent almost entirely in Asia. I travelled on from Australia to Malaysia, a complex, multiethnic country where I would later serve as a diplomat. That early experience made it much easier for me to understand and interpret the political and economic issues that would 20 years later be the main focus of my work in the Canadian High Commission in Kuala Lumpur.

But, I got more than an early exposure to Malaysia’s political economy.  More than anything else, that first visit encouraged a sense of understanding and empathy in relation to the challenges faced by a diverse community in which I counted many friends.

On that same cross-Asia trip, I was lucky enough to see Afghanistan in the last stages of a golden period of peace and relative prosperity, something that would, before the decade was out, be shattered by a Soviet invasion.

I was awed by the treasures of the Kabul museum, a rich collection that featured artefacts from Silk Road travellers including Alexander the Great.  In Bamiyan, I climbed through a honeycomb of caves and rock tunnels, up to the heights above the two great stone Buddhas that had for centuries gazed out over the valley.

When, almost 30 years later, I returned to Afghanistan as a coordinator of Canada’s postwar reconstruction efforts, it was difficult for me to process the immensity of what had been smashed and broken, including those magnificent Buddhas.  But remembering what I had seen back in the 1970s of a simple, peaceful, and remarkably tolerant country, helped me to believe that if we listened carefully, and kept our objectives modest and achievable, we might be able to do some good.

My outlook had indeed been “broadened” by that early experience of Asia, but I had also learned the benefit of experiencing things for myself, testing my assumptions, and trying to see the world as others see it.

I returned to school in the fall of 1976 a more mature and much better student. It may have simply been the fact that I was a year older, but the discipline involved in getting there and back was now part of my nature. And while the experience of encountering people and cultures entirely different from my own left me more tolerant, I also emerged feeling more confident about who I was.

The overland route that I took across Asia is now pretty much closed to young travellers. But there are today many more opportunities available to students looking to open their minds through international experience.  Here at the University of St. Michael’s College, we have exchange programs with universities in Italy and Ireland.  We also participate in experiential learning programs that place students on assignments with non-governmental organizations around the world.

My institution is not alone. Ninety-seven percent of Canada’s universities offer their students international experiences such as academic coursework, field schools, work-terms and community service learning. Unfortunately, only three percent of undergraduate students take advantage of these life-changing opportunities. We need to do better.

If university is about higher education, international experience — travelling, working, or studying in other countries — is about broader education.  It is tremendously important that young Canadians pay attention to both dimensions. Canada’s prosperity and security depend on skilful navigation among increasingly interconnected global actors.  Now more than ever, young Canadians need to think of the world as their classroom.