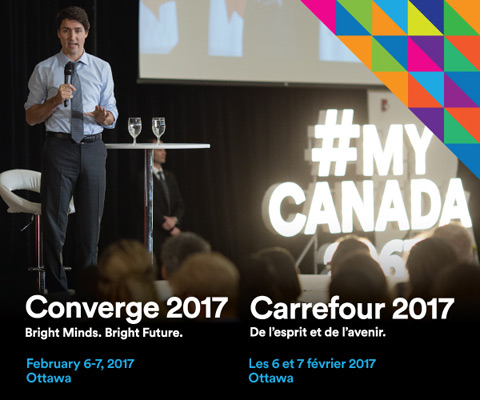 OTTAWA – “What kind of Canada do we want in the next 50 years?” One hundred youth leaders from universities across the country tackled that and other big questions about Canada’s future at Converge 2017, a kick-off event for Canada 150 hosted by Universities Canada in Ottawa, February 6 and 7.

“Seeing the energy, ideas and commitment of these youth leaders over the past two days, it’s clear that Generation 2017 is ready, able and committed to building a brighter future for Canada,” said Paul Davidson, president of Universities Canada. “I’m excited to see how they’ll bring this momentum back to their campuses, organizations and communities to advance Canadian pluralism, reconciliation and innovation.”

Canadian universities will continue this exercise of reflection, celebration and looking forward by hosting more than 250 events at campuses throughout Canada during 2017.

Learn more about Converge2017 and watch recordings of our keynote speakers at www.univcan.ca/canada150/converge.