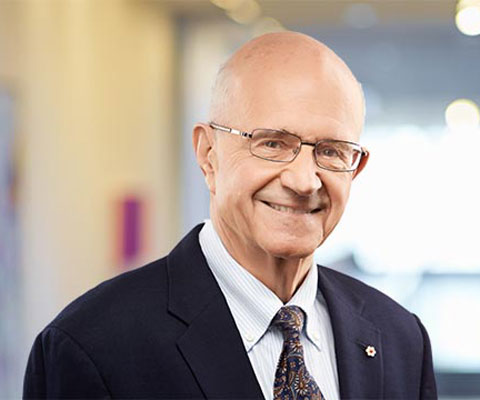 The Honourable Frank Iacobucci has had a varied career in private practice, academia, government and the judiciary.

He received his LL.M. and Dip. International Law  from Cambridge University. He began his career in 1964 as a lawyer at a large New York firm.  In 1967, he joined the Faculty of Law, University of Toronto, and was a professor of law there until 1985. He successively served as vice president, internal affairs, dean of the faculty of law, and vice president and provost of the university. In 1985, Mr. Iacobucci was appointed deputy minister of justice and deputy attorney general for Canada; in 1988, Chief Justice of the Federal Court of Canada; and in 1991, a justice of the Supreme Court of Canada.

The Honourable Frank Iacobucci retired from the Supreme Court of Canada in June 2004 and served as interim president of the University of Toronto from September 2004 until June 2005. In 2004, he joined Torys LLP as Counsel and served on a number of Boards.  He was the federal government’s representative in the negotiations leading to the settlement agreement in 2005 relating to Indian residential schools, which is the largest financial settlement in Canada.